I bet that makes u real mad, don't it?

AKA why The Furious Five really were furious. 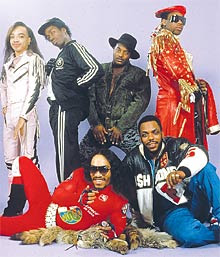 The old-school vs. mid-school beef between the Bronx/Harlem and Queens finally reached boiling point in the late 80s during a tumultuous few years which saw BDP's tete-et-tete with the Juice Crew snowball into a full scale war on wax between the two boroughs (with occasional interuptions from Brooklyn and Philly), the slew of dis records Kool Moe Dee and LL traded, and Melle Mel throwing the rattle out of the pram by refusing to give up his freestyle championship belt to Mikey D at the New Music Seminar, but tensions had been bubbling ever since Run Dmc genre-shifting Sucker M.C's in '83.

Much in the same way that Henleys has recently usurped McKenzie as the brand of choice for the generic white trash who populate the U.K, Run Dmc's emergence and debut LP forever changed the landscape of the rap game previously ruled by the holy trinity of o.g old-school groups. Collective stinkeyes were sent in the direction of Run Dmc by The Trecherous Three and The Coldcrush Brothers but it was The Furious Five who were most vociferous in their contempt for the Queens trio as they spent much of their recorded output throughout '84 and '85 firing subliminals before Run Dmc's truimphant Raising Hell LP in '86 was the final nail in the coffin for the old-school, only for the cycle to cruelly repeat itself mere months later when a thinly veiled dis track entitled Ego Trippin' by some Bronx group called Ultramagnetic MC's who you may have heard of poo poo-ed their elementary lyricism and left the front gate open for groups like Eric B. & Rakim, Kool G. Rap & DJ Polo and BDP to kick in the door, thus supplanting Run Dmc from their thrones and sending them hurtling down the rap-game hierarchical system, bar the odd Beats To The Rhyme or Pete Rock produced moment.

And why were The Furious Five the original Madd Rappers? Fear because Run Dmc's state-of-the-art tuff sound was the death knell for old-school rap? Jealousy because Run Dmc successfully crossed over to the mainstream and were makin' that Barry White money? Insecurity because Run Dmc's street-friendly Kangols, bombers and Lee jeans steez made their ostentatious attire seem mad gay? A bit of all three, probably, but the embittered dis records The Furious Five made in protest like Step Off and The Truth ended up being some of their finest tracks and, perhaps inspired by the new competition, Melle Mel produced some of his greatest work like Beat Street Breakdown, World War III and King Of The Streets during this period. Don't watch dat, watch disses :

The first Furious Five LP sans Grandmaster Flash (the original Eric B in regards to lack of contributions for records his name was credited on) with Melle Mel reluctantly taking up the Grandmaster mantle at the request of Sugar Hill Records boss Sylvia Robinson. The album's highlight is undoubtedly Mel's epic World War III but The Truth was the album's statement-of-intent track with a suspciously Sucker M.C's influenced production allowing the group to defensively point out that their sartorial flamboyance pulls a certain class of bird that a group of lads in tracksuits and trainers couldn't hope to follow and that, just because they look like drag queens, they're not actually fooken' puffs, okay?

The Furious Five - Step Off

'84's Step Off stands up as probably the best full group record The Furious Five made and one of the best examples of that mid 80s sound which was a fusion of electro and post-Run Dmc starkness alongside Fresh, Fly, Wild And Bold by Coldcrush. A synth interpolation of For The Love Of Money by The O'Jays is the base for Melle Mel to start the song by casually belittling Sugar Hill label mate Busy Bee before the late Cowboy and Scorpio unleash a torrent of disparaging jibes towards Joey, Daryll and Jason. Rumors that The Furious Five were pissed off at Run Dmc because Jam Master Jay once laughed at Scorpio's Hi-Tec Silver Shadows remain unproven in a court of law.

Melle Mel - King Of The Streets

What initially appears to be a record waxing lyrical about his own self-mythology whilst proclaiming himself the real hometown hero of NYC, upon further inspection '85's King Of The Streets is revealed as an extended attack on both Run Dmc and the new prince of rap LL Cool J. It sounds positively quaint in comparison to the likes of King Of Rock or Rock The Bells but remains an amusing dis record and an interesting historical artefact, nonetheless.

You thought The Furious Five's bitterness didn't extend beyound making defensive records towards Run Dmc and LL in '84 and '85? Think again, mayne. Flash and the group briefly recoalesced in 1987 to perform at a Madison Square Garden charity concert and then went on to release an underwhelming reunion album called On The Strength the year after, with the singular highlight being Gold where dookie ropechain wearing (and, it's worth pointing out, Russell Simmons affliated) rappers like Slick Rick and Eric B. & Rakim to their shitlist of new rappers worthy of their scorn. Not sure what i love more about this tune : the fact they had the audacity to sample Rakim on a tune which vilified him or the bizarre kazoo rendition of the break from Baby Huey's Listen To Me during the hook. Either way, you can't beat a bitter bully, as a certain gameshow host nearly once said. 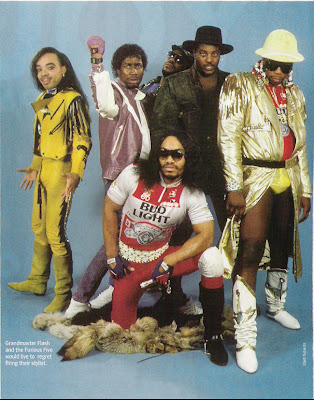 You've gotta give Melle Mel his due, though : dook was sporting Budweiser gear a good 4 or 5 years before Kool Keith's all-over print Budweiser hat on the cover of Critical Beatdown and over 25 years before Supreme's Budweiser collabo'.
Posted by Kelvin Mack10zie at 16:58

am i the only one who rates 'jesse'?

Yeah, strange coincidence that we both blogged about Melle at the same time (yo, add me to your blog roll, please and thank you).

I wish I had more Casual tracks to share, especially from that period between Fear Itself and No Mans Land. I'll definitely do some digging though, see if I can unearth anything.

Do you have an MP3 of Flash on the Beat? by Flash and The Furious?

Jesse is, um, quite catchy.

Added, Boothe. Thought i had you on there already but you were just in my Googlereader.

Gimme a day or so and i'll hook up both the studio and live versions of Flash To The Beat.

Great post. I have to say I am a big fan of 'fastest man alive' also. The beat street track is my shit though.

Big ups for posting 'Gold'. I had that on one my first tapes which was an old Telstar comp called 'Hip Hop And Rappin In The House'. classic stuff!

do you happen to know the origin of the photograph of grandmaster flash and the furious five with the blue background (like if it was from a magazine?). is that the one you're referring to as taken in Paris, 1983? i ask for research purposes. thanks!!

The Paris in 1983 comment was supposed to be an amusing parrallel between what they were wearing in 1983 and what KanYe and his crew were wearing in Paris in 2007. Clearly it wasn't as amusing as i thought.

I think the blue background picture is from one of their records, but i'm not sure which one. You could ask on OSHH.com, maybe, as i'm sure they're bound to know.