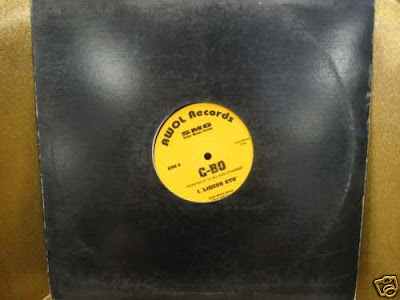 I'm not really tryna pay more than £25 for a single record no mo' but i really want C-Bo's Liquor Sto'/4 Deep debut 12" from 1993. My birthday is comin' up in october so someone should procure it me now as my present.

There are certain relatives i'd sell to Russian people traffickers if i had to choose between their wellbeing or never being allowed to listen to any lo-fi G-funk from Sacremento's finest (no offence, Brother Lynch Hung) again. Sorry various second cousins and aunts 'n' uncles i've only ever met at funerals but them's the breaks.

These two tracks went on to appear on C-Bo's 1994 debut album Gas Chamber, which gets luh over here, but as this 12" was, essentially, his demo pressed onto wax they're perhaps a smidge rawer than the rest of the album. C-Bo everyday narratives manage to cover every base you'd want covered by a 1993 gang$ta rap record (Mad Dog, cadillacs, Dickies shorts, cops, sleazy women, guns, weed, pissing in fast food establishments, OJ & OE, driving under the influence, house parties, nappy headed hoes, token references to whites as peckerwood punks, groupie ass hoochies who catch loogies, explanations on how car-jackers and cops be crampin' a brother's swag') and he's accompanied by Mobboss Productions creating a minimal groundwork of synthes and samples and then lettin' some fella called James Jones, who later went on to play on B. Legit's The Hemp Museum album, embellish them with fonky guitar which make a whigga wanna bust the same jittery moves every listen to Zapp & Roger or old DJ Quik inspire. I like Q.B thug shit homaging MC Shan as much as the rest of y'all dunns but Marley's VROO VRRROOOO-es from The Bridge have never sounded better than when they were used on early 90s g-funk like 4 Deep and Dre & Death Row's Bitches Ain't Shit.
Posted by Kelvin Mack10zie at 11:18

Yeah, Season.. is a better album than any of C-Bo's but C-Bo's catalogue is better AND he introduced Mob Figaz to the world.