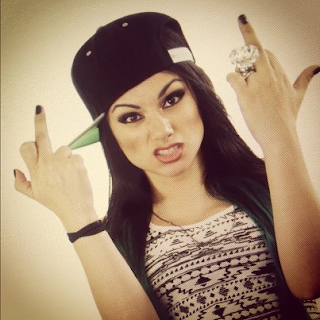 "I had to hit you with the ‘not now!’, with the ‘hold up!’
Even though you know I'm not down you like ‘so what?’
I'm looking at the bigger picture but you want a close up
What we had is in the past now you wanna show up?"


Show Tha Product's dreamy latest single then. You've got Ty Dolla $ign at his absolute sleaziest on some Robert Redford in Indecent Proposal type shit, but we can let him get away with it this once because 1 Time here ends on a cliffhanger with Ty still desperately begging Snow for a shag as she's probably laid up in the crib listening to the O.G version of Paranoid and laughing at Ty's penchant for fingerless leather Legion Of Doom gloves.

Most of Ty Dolla $ign's own music in 2014 has either been rubbish or ruined by unwanted guest verses by rappers, but we can let him get away with that too because he's also spent the past 12 months making his otherwise-awful Atlantic Records label mates like B.o.B, Lupe Fiasco, and now Snow Tha Product listenable with the legitimate 5/5 jams he's penned and produced for them. It's the small victories that are always the sweetest.
Posted by Kelvin Mack10zie at 17:47

This is pretty hot.

Are we witnessing Snow's transformation into the female Baby Bash here?

Aside from being a gimmefoods doppelganger [ http://instagram.com/p/v4H4oDj_qk/?modal=true ] Snow is the latest in a long line of personal rap crushes. I wanted to like this song but...

As a side note, due to Canadian content broadcasting rules, the other Snow [https://www.youtube.com/watch?v=StlMdNcvCJo] still gets regular spins, although it's always the Shan-less version.