Generally, Brits making Rap music fills me with the same weirdly-conflicted sense of pity that I feel when watching the Paralympic games. Fair play, though, because I do have a bit of a soft spot for Giggs since his trademark wooden flow is a glimpse into what woulda happened if Paul Barber had been cast as Trigger instead of Denzil in Only Fools And Horses.

As an occasional Giggs fan, ya host was stoked when the tagless version of Monsta Man finally turned up as a bonus track on the deluxe version of his third album last year. Pretty apt that Giggs has described Monsta Man as "that London bounce" because the song's priapic theme & 8-bit beats predate one of the biggest Baton Rogue anthems in a similar style of recent years: Lil' Cali & Mouse On Tha Track's Dat Dick.


Rest in peace to Roger Lloyd-Pack. You went out on a high with that Ruthless Records-to-Only Fools And Horses analogue Bradley & I came up with last year: 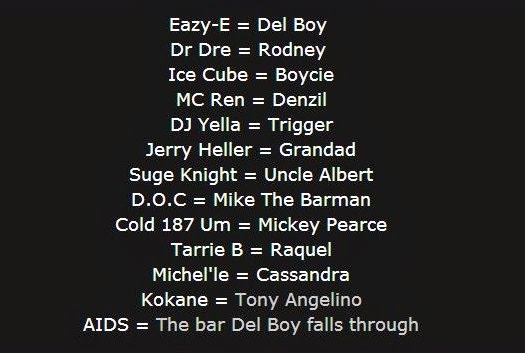 Look What The Cat Dragged In > Illmatic said...

Giggs is poor, nothing on the likes of Trim, Prez T, Wiley etc.

I was blown away when I realised Harry Grouts still alive and is the aul fella on Game Of Thrones. You need to reup the Porridge/Bad Boy one when he carks it.

Not to toot my own horn, but I reckon Genial Harry GRODT is one of my best puns.

I used to love all that cringey off brand uk hip hop but now see its woeful and I kinda like grime now, either way Im a turncoat and will probanly never get a retweet off Big Dawg Gerry Adams. Never bumped Anticon though!

once bought blind a braintax album, sold it a couple hours later. still counts when tryna bond with that mate who loves don't flop.