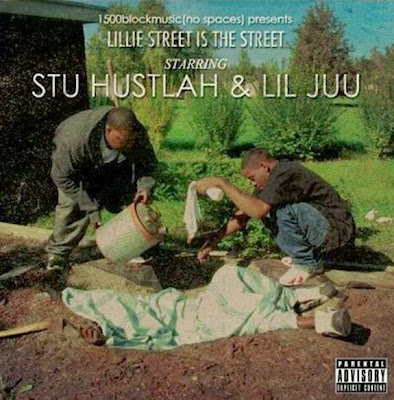 So, the Stu Hustlah & Lil' Juu album dropped yesterday, and even if you're not a fan of low-budget regional variations on Jacka-core mobb music it's still worth celebrating that someone can release an album with a cover like this in 2014 without it coming off as some Noisey-sponsored dress-up Tumblr-rap. That's because you can only really pull off such a cover if your whole aesthetic rejects the 97% of Rap music which isn't C-Bo, the Mob Figaz, and Ampichino; an aesthetic I find awfully appealing in the era where individuals with no kind of common interest like Young Thug & Wale end up on the same song together.

Truthfully, though, I haven't got around to checking the album yet because I'm still stuck on that ridiculous Ampichino joint my bork brother from another mother Lars posted t'other day:


"On my knees I ask God when I'm gon' die
You can look all you want but ain't no God in the sky
I try to run from this pain by buying jewellery
Fuck it, when I die let my enemies do my eulogy"

Ampichino - Eulogy
(From the forthcoming The Eulogy album; 2014)

"da krazies 2" was my favourite album of last year

This song makes me wish Ampichino would do more songs on his own.

wale just jacked the beat, why would young thug ever put him on the remix to his biggest song? silly

Totally agree, the cover would look goofy as fuck if A$AP Fuckboy #7 released it, but it fits the Fort Wayne scene's lo-fi aesthetic.
I've got to get up on some more Murder Gang music, I haven't heard nearly enough, but what I've heard sounds tight.

That Ampichino song is dope as fuck. Best rapper out.

The song you linked tos a monster. Pity tumblr media conspiracy sullied "Sad" forever cos this genres been a genre for like 5 years and doesnt have a snappy name. Yay & Midwestern Areas Lonely Reality Mobb Muzick

Ay were you aware Pure Pimp Fene was a whole EP with other songs?

I always thought it was just a single w an instrumental so never bothered with it. Locadelically Him is so good

I'm a big fan of multitasking by knocking out posts when I'm in the bath myself.

Greatest rap tragedy ever: the vastly superior video mix of Pure Pimp not being on the Pure Pimp EP.

"Some say I rap to depressing
Stay strapped with a Mac, while you rats was confessing
Underover was watching us - that was a lesson
The nine months in the juve' - nigga, that was a blessing
My nigga in the essence, my son's got questions
Told my youngins: stop stressing and start repping
Lethal injections, creep through your section
Sleep with my weapon, beef with no questions
Eat you in seconds, my peoples delete your brethren
I did your eulogy then I spoke with your reverend
(...)
For any snitches, you can picture my poems
But I'm not about to preach to you - remain calm
Took my shahada, searching for a higher power
On my knees, begging for mercy in my final hour
Born again, rebirth like the Dalai Lama
I voted for Obama but I still got the same problems"

But everyone at the racquetball club would be so disappointed!

@Lars
Totally agree that "Betrayal" is one of the best rap songs of 2013.