For a while now I've been attempting to convince anyone who'll listen that ZMoney's former fidus Achates Bandman Kevo was the real mastermind behind 2013's magnum opus Rich B4 Rap, and backing up my seemingly-ridiculous claim with the irrefutable evidence that Kevo's Who Is Dat? is better than anything ZMoney has dropped since he & Kevo stopped collaborating.

There are a couple of songs on ZMoney's new The Mobb Tape compilation which either halt this decline on account of their catchiness (Rollin') or are so good that any of their problems become temporarily irrelevant (the single Let You Know), but all my issues with his post-Rich B4 Rap work are otherwise evident in abundance on there: ZMoney now comes across like he's either trying too hard or not trying hard enough, when he once made music which sounded spectacularly effortless; Bandman Kevo's presence has been replaced by an interchangeable string of ZMoney's IRL friends who can barely rhyme and/or have the personalities of burnt candles; ZMoney's sly sense of humour and slight eccentricities have now all but disappeared in the absence of Kevo; his music now just sounds like yer typical west side Chicago-Rap, whereas Rich B4 Rap contained songs like Lackin' and Ferragamo which were anything but regular.

Rumour has it that there's a deluxe no-DJ version of Rich B4 Rap due out in a few months, so if it does come to fruition then Bandman Zevo really needs to get an official credit on the front cover because he's as essential a component to the album as Ghostface was to Only Built 4 Cuban Linx or Raekwon was to Iron Man. The new cover could look a lil' sumthin' like dis: 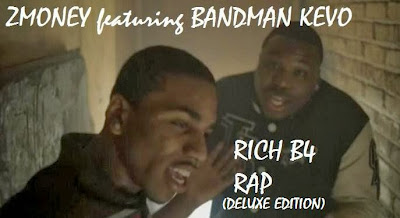 Mistral is a must.

Kevo and ZMoney were def best as a team; Kevo was more bars, and ZMoney has the swag. But there's another missing piece here: JNeal.

The three of them together are where the magic happens.

why are rappers letting 3 djs do drops on their mixtapes in 2014?

heroin musik has more good songs than rich b4 rap

LMAO KEVO WANNA BE LIKE ZMONEY, KEVO WOULDNT EVEN BEEN NOTICED IF IT WASNT FOR Z THREW HIM ON HIS SONGS NAME ONE SONGS OF KEVO THAT ZMONEY JUMPED ON OF HIS & ALL KEVO MUSIC LATELY BEEN GARBAGE HE NEED ZMONEY BACK AROUND HIM!

I inherently trust anyone with "Bandman" in their name

Still better than FBG: The Movie as far as clique-tapes go.

zmoney is right marty, admit it!

Marty Macready shakin the rap game up on twitter

Clown shit!... Who did Kevo pay to write this stupid shit up?...... Kevo don't write his lyrics, he has no swag, no nothing... Jneal made him... Every bar he dropped was written by Jneal... That new shit he dropped was written by the other guy he's in the video with... Lil ed or some shit!!!.... Kevo will never sound like he sounded when he was working Z-money... Bottom line.. I'm sure Kevo paid someone to write this article...