Ladies and germs - it's showtime!

I'm still dilly-dallying and deliberating on whether to check out that AG Everything's Berri album from last year which some of my favourite rap bloggaz have been enthusing about due to briefly hearing a song from it where AG had a banausic Ced Gee on The 4 Horsemen/MF Grimm since 2004 type of flow going on over some bogstandard production which made his outing with Brit' trip-hop dullard Aim sound as grandiose as Spit, but I'm hoping that song can be written off as a minor blip and there'll be at least 6 joints as good as Live Hard from that last Show & AG EP which they released under the ludicrous moniker of The Show & A Experience back in 2007 on there whenever I do get around to investigating it.

In the meantime I've been reacquainting myself with Showbiz's totally forgotten Street Talk producer-album he dropped in 2005. This was released when Show was trying to diversify the Diggin' In The Crates brand with his ill-fated Wild Life Entertainment label who included perennial D.I.T.C weed carriers The Ghetto Dwellas and Bronx young bucks like Milano and A. Bless as its roster, so Street Talk is a 50/50 ratio of them and your veteran D.I.T.C stalwarts like AG, Fat Joe and O.C, the reused Big L and Big Pun verses you'd come to expect and a remix of an M.O.P 12" which wasn't even as good as the merely decent original. Here's my 5 choice cuts from the album : 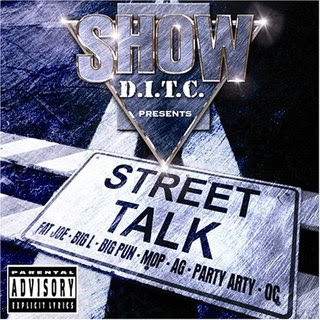 Highlight : "I need a mami for the don with no kids/and I love 'em in white thongs with no skids!"
Low point : The song was 4 years old and had already appeared on the D.I.T.C Presents.. Wild Life EP from 2001.

Highlight : Show's take on the then de rigueur chipmunked up soul-sample joint template turns out as a standard hard-nosed D.I.T.C banger where Party Arty namechecks Parker Lewis Can't Lose.
Low point : Would've personally preferred D. Flow was on this instead of Fat Joe because I could've done with some more Ghetto Dwellas joints like Make It Official or Who's The Dirtiest?

Highlight : Arty suddenly breaking into an interpolation of the Fiesta remix hook towards the end of the song.
Low point : There weren't enough instances of Arty rapping solo over good production so this should've been longer than 02:59.

Highlight : Fat Joe kinda rips this, so tally it up with On My Way, AG's Underground Life, Who Got Gunz, the original Ahmed produced version of Best Behavior, Lean Back and Ja's New York as the only noughties tracks he should've been allowed to rap on.
Low point : Weirdly, the album version of this is edited for cursing when there was a perfectly fine dirty version on the 12", albeit with a moderately different beat.

Highlight : Arty insinuating that he's had carnal knowledge of celebrity females as varied as Tia & Tamera and Christina Aguilera.
Low point : Unfortunately not that Ruck.

any mention of Ced Gee on Horsemen automatically brings that horrible "YO MONEY GRIP, MONEY GRIP" to mind. ugh...

Can I add one more low point to the third track? The name Party Arty.

Whatyoutalkinbout Party Arty is brilliance, maybe its cos im from somewhere where even the name Arty is almost exotic but you cant front on class A silly like that.

I assume im alone in enjoying a bunch of Ceds awful rapping on that album, Yo Money Grip... included.

I could imagine myself dismissing the AG album too if I heard some of the songs outside the context of the album. Theres a few that are a bit "flowery" to say the least but that and the unorthodox flows makes sense on the album imo, beats grew on me too.

That A Bless tunes great, never even heard of that dude.

Everything's Berri is dope, though different.

You peep the Ray West and A.G. EPs yet, dunny?

Not yet, no. I figure I should check Everything's Berri first. Did you see that he's doing an album with the Snow Goons? Kool Herc's kidneys will implode if Hustle Crowe appears on an album by a D.I.T.C member.

Done, I think that was the last we ever heard from A. Bless.

Damn I completely forgot about the EPs, gonna check those out now nice one.

Ah Im a sucker for a ridiculous name.