This time, issue # 2. The Beastie Boys haven't prospered this long without knowing exactly who their audience consists of, and so every issue of Grand Royal was filled accordingly with adverts for skate brands such as Vans, Droors and Supreme, punk-related labels like Dischord, Touch & Go, Revelation and Sub Pop, and your token middlebrow rap releases by The Pharcyde and pretty much everyone who ever put an album out via Mo' Wax.

But amongst them all there was this "WTF is some rap for actual black ppl doing in here?" moment with a full page advert for releases on Khayree's Young Black Brotha Records imprint by Ray Luv and Young Lay : 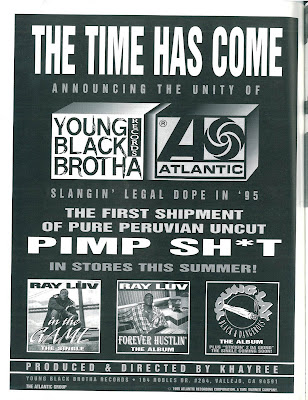 And this brings us to a question that's been troubling me for donkey's years now : What was best item of outerwear in a Young Black Brotha Records video? Here at The Martorialist we're torn between Ray Luv's sheepskin coat in the All About My Fetti promo and Ant Dog's tan duffle coat in the Definition Of A Hustla clip because, well, who the hell expects to see mid-nineties Bay Area gangsta-rappers looking like John Motson and Paddington Bear : 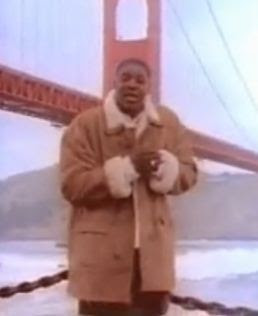 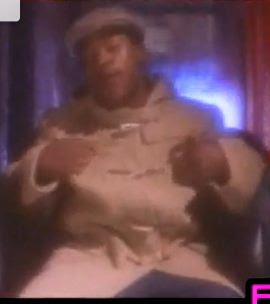 That Grand Royal advert actually wasn't the first time that seemingly disparate worlds of Khayree and the Beastie Boys had collided because a couple of years earlier Khayree sampled Slow And Low on this, the greatest rap song recorded over the phone from prison (well, from Fresno County Jail) ever. Having said that, I wish Dre & Khayree had re-recorded this when he got released in 1997 because he rips it for nearly 6 minutes straight but most rap fans won't listen to it because they're pseudo-audiophiles who want proper vocals recorded through microphones in, like, real studios. This ain't Tubular Bells by Mike Oldfield or Emerson, Lake & Palmer spending months multitracking kazoo solos through the Alpha 60 computer from Alphaville, cuzz.

and it wasnt the first time khayree sampled slow and low: "pinky's cold stupid party" by new choice from 1987 has beastie-yelling scratched over some slappin 808, and mac dre later references this song with the "make the fly girls wiggle" line, and of course "get stupid".

i love dubee's "my thang" video, but it always gets taken down from youtube

Surely this was during their buddhism, whining about Prodigy playing Smack My Bitch Up period too? Makes it even weirder if so.

I never had a problem with the actual vocals on Back N Da Hood but it took me a while to get over the difference between that and the properly masterd production, it was really jarring at first. They did amazingly well considering though. Speaking of which, took the distorted vocals thing way too far.

My Chevy and 93 were always my favourites, 93's beat is epic.

Actually, Id gladly sacrifice above tune if it meant Run Dmc kept Slow and Low to themselves cos isnt near as good as Dee sees real well cos hes got four eyes. The OG beat was hard as fuck too.

Oh shit. That song goes kinda hard, Mister Jay. I wonder if Khayree was a Beasties fan like Quik and Pimp C.

Yeah, it was, Done (1995). Much prefer the o.g Back N Da Hood version of My Chevy without Mac Mall even though he kills his verse on the version on Young Black Brotha. Just sounds wrong having a rapper in a studio on that shit next to Dre.

Definitely, shame though cos he does rip it. Never knew about Pimp liking the Beasties, weird cos I remember reading in an interview he didnt think white people could rap well or something to that effect.

Isnt New Choice a white rap group themselves? Im sure I read that somewhere. That sites really great Jay, loads of old LA shit on there.

Should say "Ill Communication" and "White Castle fries only come in one size" in them comments.

Great post. I love that Mac Dre song so much. Had me thinking about jail raps, have you ever gotten into any X-Raided stuff?

Bits and bobs here and there.

new choice is a group of black girls, but khayree has even older shit with some white rapper(s?): http://www.youtube.com/watch?v=pArkWvlAebg

its seems like the old school west coast producers were way down with license to ill, at least as the sampling shows. dr dre definitely loved that shit.

1983? Damn, that's gotta be the first references to Hubba rocks on record then.

Also, Mister Jay - a question you might be able to answer :

The song isn't on the Thizz reissue of the ep and neither I'm N Motion or Young Mac Dre are that length, so any idea what it is?

its another telephone rap, another story about fuckin/mackin a bitch, where mac dre tells her "damn baby, your cock is kosher"

Thanks Jay. I dont have that either, iv the one with Im In Motion on it.

Thats the group I was thinking of. This is probly where i heard it: http://www.cocaineblunts.com/blunts/?p=2444

I did a revieew of the second ish of the Grand Royal Magazine. Unfortunately it's in English.