If i were king of the world i'd enforce a law that any generic shitbird who wears sandals or flip-flops should face a punishment of either being beaten to a pulp with socks filled with jagged rocks or weighed down with breezeblocks and then tossed off (no Pee Wee Herman) into the murky, shitty waters of the docks. 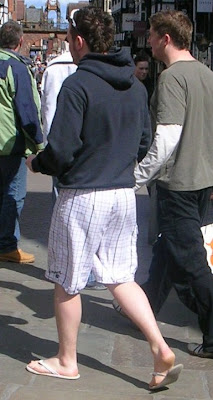 Men's feet are disgusting parts of the male anatomy which should never be on display in public. Well, unless they belong to the mysterious 4 toed foot statue from Lost, of course, but as we found out a few weeks back, that might not be the foot of a bloke, might it?

men's feet aren't disgusting. Disgust is a mater of perspective.