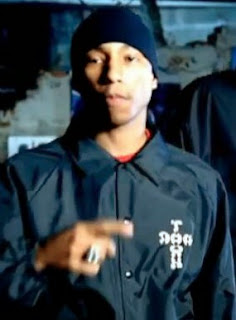 Here's another recent example of multi-regional, shameless hook biting where the third song is the one which ended up with some money behind it and thus made its way into global rap radio rotation.


Bar-None from Too Much Trouble 2014 Lil' Chris' Gat Damn video drops back in july 2013, although the song is titled as Goddamn on his Money Talks mixtape which dropped a week or so later.


A couple of months later in the twlight of august, Florida's NMB Stunnaz God Damn surfaces online and is scooped up by DJ Spinatik to feature on his Street Runnaz '77 (Streets On Lock) mixtape.


A miliitary-brat who eventually settled in ATLanta, Rolls Royce Rizzy's Gah Damn first appeared sometime around november 2013 but didn't start making much noise until april of 2014 before the inevitable all-star remix with Twista, K Camp, Jermaine Dupri & Lil' Scrappy, and an east coast-friendly remix with Cassidy. In early june, Rizzy signed to So So Def.

Moral of this story? It coulda been Lil' Chris gettin' play on Westwood and signed to So So Def now on some Rap Game Time Bandits type flex with his boss Jermaine Dupri, but, hey, at least it wasn't Same Shit, Different Day or Keep Your Head Up that got jacked.
Posted by Kelvin Mack10zie at 11:24

Now that is biting.

Still hear the solo version of the Rolls Rizzy one more than the remix.

Let me find out this is like sampling the funky drummer.

I hope Lil' Chris eats those godamn biters. Like literally eats them!

I want to say I heard lil phat make this exact same song years ago.

Hmmm. I don't recall a Lil' Phat song like this. Plz link it if you can remember it.