Yes we can scan 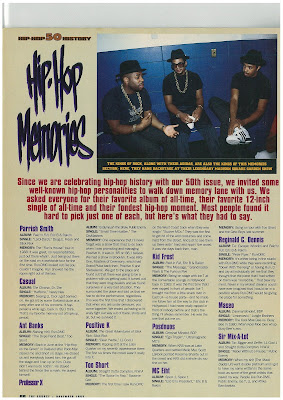 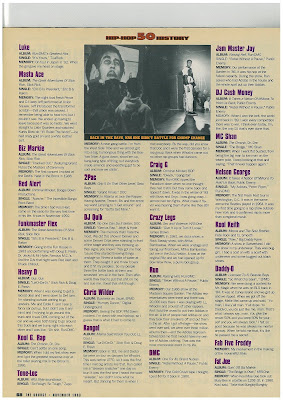 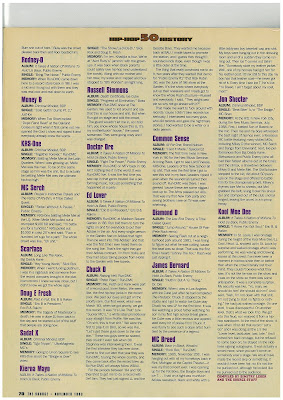 Too $hort choosing Spoonin' Rap as his favourite rap single is a personal highlight, Luke reminiscing about getting blown on stage is probably the grandest memory and it comes as no surprise that a raging narcissist like KRS would plump for Criminal Minded as his bestest rap album evah imo, but who knew Crazy Legs held Sex And Violence in such high esteem or that Kool Keith and Kool G. Rap's favourite albums were Mecca And The Soul Brother and The Chronic, respectively?

Seems fitting to post this today because I'm off to see Ice Cube and Naughty By Nature tonight. Here's hoping Naughty don't get ideas that anyone wants to hear anything from their catalogue post-1993 and that Cube is sensible enough to draw a line in his set list after the Westside Connection album unless he's planning to do a medley of his verses from Game Over, The Geto, Connected For Life and the Bad Day, Worst Day remix.

saw Cube a couple of years ago. Good show but he didnt do as much stuff from the 1st 3 albums as Id have liked. The NWA medley always kills it though.

N.W.A medleys will always kill it.

This, the crack special, the one where Scarface, MC Eiht and Benzino discuss gangster rap and the one where Run calls Hammer "country" are top 5 Source moments for me.

Not fond of Feel Me Floe?

It's not bad, but I can live without it.

I remember cutting out that RUN-DMC photo and using it as part of a report about hip hop back when I was a junior in high school.Damn I am old!!