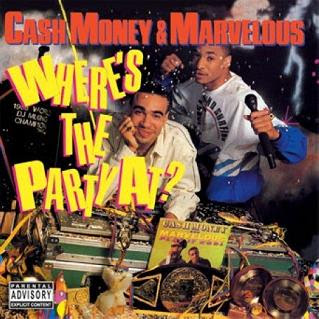 Yes, it was the first rap album where its rapper was overshadowed by its maestro d.j/producer; yes, all the best tracks from it came out as singles as they did with Livin' Proof; no, unlike Livin' Proof it doesn't have any killer album tracks like Inna Citi Life and Serious Rap Shit which made owning the tape essential; and, no, don't even hazard to suggest that MC Tee's rapping was a poor counterpart to Mantronix's production on the Mantronix debut LP you feculent little infidel.

And this is precisely why Jazzy Jeff will always get my nod over Cash Money as Philly's preeminent dj because Jeff and Will complimented each other as a dj & rapper duo, they were deft songwriters who accidently pioneered horrorcore with Nightmare On My Street and emo-rap with Parents Just Don't Understand, Summertime is still unequaled as far as homages to Rakim go, and Jeff was the unmitigated victor of the who-made-the-best-cut-up-track-with-Trouble-Funk's-Pump-Me-Up-as-its-basis? competition the 2 Philadelphia scratch-masters held because Cash Money's Scratchin' To The Funk is too drawn out for an instrumental scratch track at nearly 10 minutes in length, while Jeff's Pump Me Up from Will's Willenium album is far more sensibly timed at 4 minutes and features Will on hypeman duty before he reverts back to the Fresh Prince for a verse at the end.

Will Smith ft. D.J Jazzy Jeff - Pump Me Up

Cash Money never appearing as a reoccuring character in one of the best sitcoms of my youth alongside a cast which included a dime like Karyn Parsons is also worthy of consideration in this discussion, but perhaps the most important factor in Jeff surpassing Cash Money as the dj caliph of Philly is that their Biz + Rick subsuming posse cut So Fresh helped make the conservative throwback-rap aesthetic pushed by Jurrasic 5 and Ugly Duckling at the arse-end of the 90s obsolete, and for that reason we should all be beholden to Jeffrey :

i was fuckin shocked by mc tee's greatness upon listening to mantronix how after hearing bout his mediocrity for ages. dunno, maybe its his delivery or somethin

"make sweet love and bite off your titty..." verse ftw

yeh your right bout the will song, that and pharcydes the only one of those i can stand

Common and Maseo from De La's Like They Used To Say is the other main joint in that vein from '99 for me.

Tatyana Ali wasn't and still isn't fuckin' with Karyn on any level, and Karyn's actually been in good tv shows post-Fresh Prince like Denis Leary & Peter Tolan's The Job.

ah man shes got way too much of that black chick off coronation street swag minus the rack whereas tatyanas body + that episode where she sings in the shoppin centre cements her status as g.o.a.t. banks breezy.

yeh maybe its just the afros throwin me cos in fairness corrie chick would get it. but she cant hold a candle to that o.g. black corrie chick with an afro, i think she was married to curly or somethin.

Damn, 2Shin, appreciate the love and you're oozing that Taka Michinoku hanging out with Trish Stratus & Torrie Wilson swag in that pic, g.

Agreed on the overall diffs, DJ Cash Money may have right out there deck skills, but Jeff has a special place in the history. I dont care if Charlie Mack was first out the limo, Jeff was first that took me away with the 'chirp', all the doozy cuttin on 'Magnificent' and even before then...

Can I just say that Bizmarkie does NOT suit a one-piece dungaree set, not a strong look

btw. that youtube version of So Fresh isnt half as good as the og version from the alblum...

To be fair, I don't think anyone suits an all-in-one dungaree set unless they're Kevin Rowland or a member of Jodeci standing underneath a waterfall.