What, you thought just 'cause C-Murder is locked up that the UK chapter of the No Limit soldiers would let you get away with this gaffe the other day?

You can try and play this off as a standard Grauniad typo if you like, but da streetz know this is yet another example of a faux-pas by Petridis (a man who Dom P once recalled had the clammiest hand he'd ever shaken) admidst one of his rapper jokes which even Jonathan Ross would've fact-checked more thoroughly. One expects such bloopers from dumb NME hacks blogging about "Gucci Man" but you're a music editor on a national newspaper, son, so step your game up.

Still, it does mean that we've finally been befallen with a convient excuse to pay tribute to Master P's The Ghetto's Tryin' To Kill Me cover and its classic title track which features none other than Silkk himself before he affixed 'The Shocker' to his moniker. Percy may have had album covers which were more elaborate or more amusing, but sometimes a perfectly executed simple photograph trumps any kind of extravegant Pen N' Pixel alchemy : 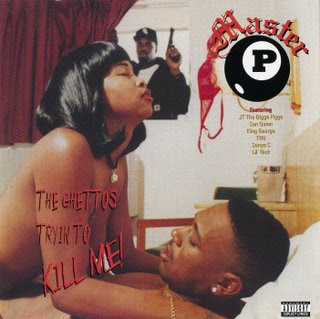 Master P ft. Silkk - The Ghetto's Tryin' To Kill Me

Although P' blatantly pillaged song concepts, rap personas, and rhyme styles from the likes of Eazy/MC Ren, Geto Boys/Scarface, 2pac, Dru Down, and The Luniz during the early Richmond era of his career he always imbued the results of his pilfering with enough of his own eccentricities to make them distinct, thus The Ghetto's Tryin' To Kill Me was his weird emo G-Funk remodelling of My Mind's Playing Tricks On Me.

For those who've only ever seen the scene where Louis meets Shaun Brauch at the Pen N' Pixel studio, here he is visiting Master P at the No Limit mansion too.
Posted by Kelvin Mack10zie at 09:21

didn't master p's mansion get fucked up in katrina?

Complaints from the DMCA, yo.

I dunno, Brad. I do know he's still filthy rich, though.

"thanks a lot, whoadie" ha

i was under the impression p went bankrupt a while back.

He filed No Limit for bankrupcy to leave Priority and move to Koch back in 2003 or 2004, but I'm pretty sure he's still very, very rich.

whoa you had to remove ALL the hyperlinks? that must have been painful them thinks are time-consuming. but surely very few of those are released on majors? crackers really aint playin fair jive anymore.

Usually when you get a DMCA warning you get an additional email telling you what song(s) they want removed. No email turned up so I just removed all the major label ones, but I was fiddling around on the BB in the bath and just deleted the others too.

The post had nearly 1000 hits, so everyone who needed to see it in its original form probably saw it.

Oh shit, just realised it was probably the Thug Lordz song I uploaded myself since they had all their songs removed off Youtube. D'OH!.