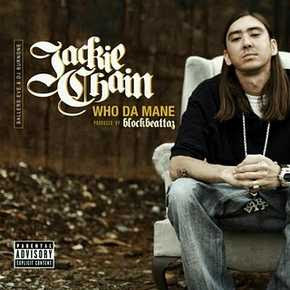 Ayo 2Shin : can't deny I'm a smidgen disappointed that the Block Beattaz didn't go ham with their Ministry Of Sound compilation so your boy Jackie Chain could fulfill his destiny by rhyming over Salt Water by Chicane, the K-Klass remix of Naughty Girl by Holly Vallance, For An Angel by Paul Van Dyk, and Fuck On Cocaine by Lisa Lashes on his Who Da Mane album. Your peoples can now finally put the humiliation of Jin losing a rap battle to Esoteric, everybody hating Jonathan Ke Quan in Indiana Jones & The Temple Of Doom, and Burt Kwouk shamelessly coonin' in Last Of The Summer Wine firmly behind y'all because you now have a non-martial arts performing entertainer you can de facto be proud of.

I 'unno why they didn't put Diamonds And Cadillacs on the album, though, since it's the closest song Jackie has to a hit, and I'm also rueing their missed oppurtunity in not utilising Cam's "not from Houston, but you can call me lil' flip" line from the Never Scared remix for a hook, but, weirdly, there are a few subtle allusions to Cameron Giles on there : Mack A Bitch features the same sample as Losing Weight part 2, and on Cuz It Feel Good he not only rhymes over the same O'Jays sample as Real N*ggas but he employes the services of that Chinky Brown R&B diva from Harlem too. Homage or coincidence?

I digress, because Rollin' is simultaneously a paragon of the Block Beattaz sound and the "European housewife-rap" aesthetic Timbaland once spoke of creating, Bankroll has been an earworm since I downloaded it off DirtyGloveBastard last week, Livin' It Up is an equatorial antidote to the current Brass Monkey climate outside, This Is Not Enough affirms that there's still life in t.A.T.u 8 years since anyone last rubbed one out to the brunette, and Off Top is almost like a Huntsville take on Waka's Grove St. Party, which is the highest praise your humble author can think of at this moment in time :

We finally have the credible azn urban idol we've been looking for (azn dudes who make "comedy" videos youtube need to sit the fuck down).

I haven't been this proud since Rufio macked on the Fresh Prince's little sister in "Fakin' Da Funk". One of the few full films youtube still hasn't bothered taking down.

I reckon Jackie's next sample is prolly gonna be some scampi shit, I predict Sidney Samson. Riverside used as some sort of reference to a block or housing projects.

Hoping for Billie Ray Martin's - Your Loving Arms tho.

The remix is one of the few joints I've uploaded to youtube 4 da lulz:

Another 2Shin Youtube classic alongside the Rob Lowe tribute video.

James, I was thinking more of a Jackie Chain + Sasha & John Digweed remix project, personally, but that could work too.