Beans, Beans, good for the heart

But the more he drops Ecstasy, the more he gazes all doe-eyed at Peedi as he dreams of squeezing on his arse. 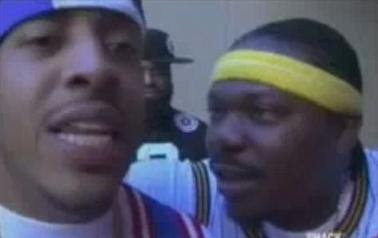 Beanie's Public Enemy # 1 mixtape with Green Lantern was the coldest east coast mixtape of 2005, but in the wake of its popularity the S.P 2 : The Movie 'tape he released with Clinton Sparks that year got left at the prom without a date like Brian Krakow in that episode of My So Called Life where he dumped the fat chick from Clueless he was supposed to be taking to the school's World Hapiness Dance to go with Angela but then got ditched by her when they arrived.

Besides the usual Clinton Sparks mixtape blends like Beanie's verse from Tales Of A Hustler part 2 and an exclusive T.I verse over the top of Biggie's Dead Wrong, S.P 2 had some peachy examples of Beanie rappin' over the sort of classic breaks/golden-era instrumentals which he and the other paramount members of State Property have always sounded more than adroit over, so here's the best 3 of 'em from the 'tape :

Remember that scene in Carlito's Way where Fat Man Saso asks Carlito why he has so much contempt for Benny Blanco when they're essentially both the same person at different stages of the game? That's how I felt when Styles was dissing Beanie during the Lox vs. State Prop beef back in 2001 and 2002. The likelihood ratio of Clinton just throwing any old Styles P verse he had in his vault on Same 45 is fairly strong since neither rapper acknowledge each other's presence in the song, but these 2 over The Bridge Is Over could only conclude positively, and hey, at least it's a great Styles verse which isn't invalidated by some abominable Swizz produced monstrosity which sounds like a Disney theme park underneath it. Btw, how come nobody ever let me know that Barrel Brothers had a video?

In the era of "I only listen to Biggie, 2pac, and Jay, yo!" being the stock response from the lion's share of rappers regarding their listening habits, it was always refreshing that State Prop' not only paid homage to old classics from their own city by Schoolly D, Tuff Crew, and Cool C, but they were total gangsta-rap nerds who were equallly as comfortable referencing Scarface and Big Mike, Ice-T and Tha Dogg Pound, or B.D.P and Raekwon. And so Philly finds a couple of seasoned breakbeats and a perma-whistle (possible Bill Alfonso tribute??? After all, ECW was a Philadelphia institution) used to excellent effect as a backdrop for the always dexterous Peedi to act as the warm-up man on the first verse before Beanie comes along to take MC Ren's rereoccurring "broomstick up the butt" maxim to it's logical anatomically correct conclusion.

In lieu of Beanie never having rapped on the Do The James instrumental, him bragging about how his yellow rocks in his watch look like frozen piss over the same James Brown Blues And Pants sample used in Superlover Cee & Cassanova Rud's classic here is the next best thing, although it's far too short at just over a minute in length. Other golden-era tracks I wanna hear Beanie and the State Prop' crew rap over : I'm Not Playing by Ultimate Force, 5th Ward by Raheem, and Another Execution by Above The Law.

Pity the song with Cam on the 'tape was just a blend and the few other actual songs they did together were so disappointing, besides The Roc (Just Fire) where Bleek' verse loomed larger and stole the show, because at least one of their collaborations should've been the most graphically rotten ig'nant anthem of the last decade.
Posted by Kelvin Mack10zie at 19:31

It seems like Mil's from Philly, he's a clone/proteje of Beanie Sigal, the album features rare guest verses from Sigal, UGK and a hook from Bun B.

Consider this me repaying you for your re-ups.

Oh shit. Never even heard of this guy.