Where are the middle aged blokes dressed like Alain Delon as Jef Costello in Le Samourai or the eccentric 30-something chicks going for that whole Cruella de Vil look? Nowhere we've been with a camera in the last week or two, so, all we can do is bide our time with another gander at denim shorts : 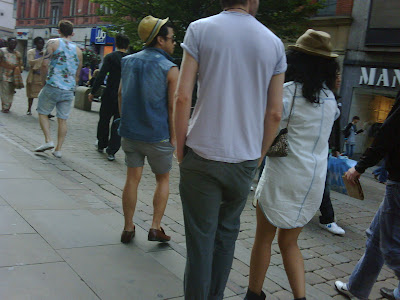 This guy pro'lly thinks he has steeze(sic), but, as always, denim shorts will never be able to escape the wrestler ghetto into semi-respectable territory. Just because one wears tailored jean short-shorts, as opposed to some 3/4 length DFS sofa sized ones, it doesn't make one any less immune to the wrestler effect; it just means that, rather than Raven or John Cena, one has achieved the Stevie Richards or Stone Cold Steve Austin look instead : 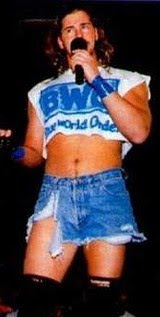 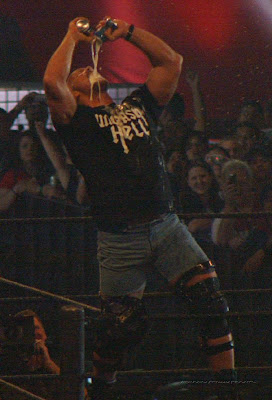 Our Martorial elegance subject's shirt? Refer to this post for our thoughts on the pressing matter of sleeveless denim, but we'll add Tom Cruise as Steve in The Outsiders to our brief list of acceptable sleeveless denim shirt/jacket sporters.

Had the nucca been rocking khaki shorts, a dress shirt instead of that jean vest abomination and got rid of the hat, he might have had a strong look going.

This winter I'm going for a look that could be described as 'Princeton'. Big shit poppin.

It's all about the khaki shorts.

2shin, i reckon you should go for a double denim combo inspired by your man Rob Lowe as Sodapop Curtis in The Outsiders :