You chaps really need to ease back with your wayward love for pre-Bad Boy Murda Ma$e, because the highlights of his Harlem World album stand as Mason's artistic pinnacle. His C.O.C era tracks were bogstandard chugging boom-bap (the only really great C.O.C tracks are I Remember When and A Star Is Born, where a young Cameron Giles shone) which aren't even playing the same sport as the grandiose posse cut 24 Hours To Live or the effervescent Feel So Good. 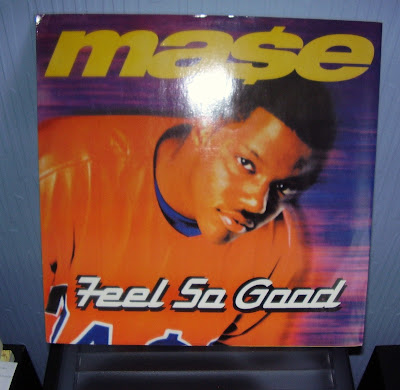 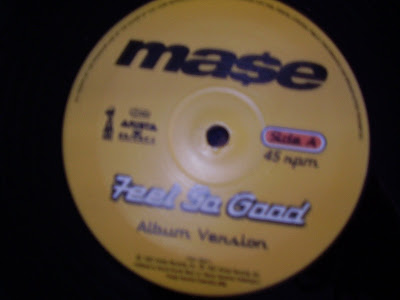 So, this looks like a standard UK press of Feel So Good, right? The crap thin paper photo sleeve and 45 RPM speed are in full effect but pop it on and it's actually a 33 RPM copy of Biggie's Hypnotize. What..the...fuck?

The Jam had an infamous pressing accident where 7" copies of Start actually contained Can't Stop The Music by The Village People and Chicago House label Trax Records were notorious for pressing faux-pas as their early releases by Vince Lawrence, Larry Heard etc were often mispressed with various other songs from the label's catalogue and pressed directly on top of old disco 12"s, but I'm unfamiliar with any instances of spectacular pressing fuck ups in rap, bar the ones in the early 90s when labels would purposefully press up bad quality wax which skipped in a rather shiesty bid to encourange vinyl-philes to convert to CD or tape instead (we won't even touch on wax which was pressed so quietly as to be inaudible to the human ear which is a whole other post in its own right), so I asked the homie and wax expert Greenpeace if he knew of any noted mispressings :

Not really sure of too many famous mispresses. There was a mispress of a nice n smooth return of the hip-hop freaks 12" which actually had a warren g track on there instead, or vice versa. My personal favourite mispress is on Tuff City by Priority one. The 12" was I can't go for that b/w showin my stuff. However on the b side instead of the 'showin my stuff' instrumental there was a dub version of a totally different priority one track which is really dope. Finding the original vocal version is my holy grail but unfortunately not even Tuff City could figure it out, they admit it was a mispress but don't know where the original master is.

If anything typifies just what a haphazard, badly organised genre rap is, it would be Tuff City Records themselves not knowing what or where the original song Dan mentions is. Beat that, other genres!

We end today back on the subject of one Mason Betha. Best use of the Hollywood Swingin' break by a rapper with a $ sign replacing the letter S in his rap moniker :

Too $hort - Money In The Ghetto

every era of mase is shit

too short all day

The unthinkable has happened. I just saw Victoria Coren in profile view.....she has a weird Jew/witchlike nose.

It's these small things that stop me loving women.

I stopped dating a woman because of her hands. True story.

A double whammy from 2shin there, with him turning heel on 2 of his previously beloveds (Vicki C and Jewish lookin' broads who aren't actually Jewish)

I'm gonna email her about dying her hair brown.

Vicki with dark hair and secretary spex would be bonerific.