If you grew up as a pilgrim entranced by the gear worn by Run Dmc, Ice-T, Slick Rick, Eric B. & Rakim, NWA, Compton's Most Wanted, Grand Puba, Snoop et al, a tiny part of your soul dies every time you see a black bloke in an item of clothing which is the sole preserve of gormless white 15 year olds circa 6 months ago : 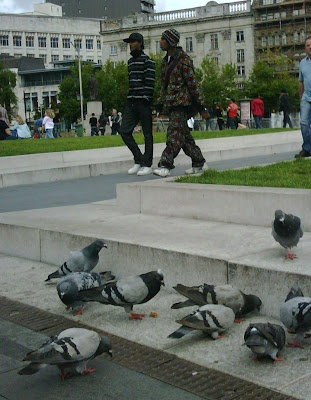 "I'd rather have some pants made out of the white man's skin.."

Is Barratt's use of pigeons in the foreground a sly Dunk collector dis? A scathing attack on generic ham 'n' eggers who flock to tacky populist trends like pigeons flock to bread crumbs and then foul up the streets? A mere coincidence? We gotta know.

On a race-related topic, we really need to talk about the worrying trend of rappers embracing the most milquetoast of crackafied faggotry : Jay-Z tossing aside Beanie, Freeway and the entire State Property camp to hobnob with Bono, Chris & Gwyneth and work with MGMT; every single rapper gushing over Coldplay; Ca$h Money Records going from the label which put out Mannie Fresh propelled state-of-the-art Southern gang$ta-rap by B.G and Juvenile to a label which puts out embarrassing middlebrow rock records by Kevin Rudolf and Lil' Wayne rock side-projects; any rapper who does a song with a glorified Will Young like Mr Hudson (the term fucking pussy has been thrown around so much that it's lost all power as an insult, but if there's anybody who embodies the term and venom behind it, it would be Mr Hudson)... when does this madness end?

Back when your author's love affair with rap was properly ignited watching Doug & Rick do The Show on Top Of The Pops it felt like the exotic antidote to the cringeworthy togetherness of Feed The World and the depressing spectacle a bunch of earnest, worthy middle aged men with mullets belting out vanilla stadium-rock at Live Aid, which had all but killed off great outlandish UK pop music made by crackers (ABC, Fun Boy Three and Duran Duran never quite recovered from that dad-rock spanner being thrown in the works, did they?). But now, the rap which was once an escape from alabaster MOR, is slowly intergrating with that whitewashed, humdrum world and shit is disgusting, b.

one of the best blog posts Ive read all year. cheers.

If i remember rightly, you were the one who threw up the Black Rob joint over Warm It Up, Kane, Punks Jump Up.. etc which got play on Westwood's sojourns to Marley's crib on the T.R.O.Y blog, right?

Nice one on that. I'd been lookin' for an mp3 of that for years.

Nice post, although I don't get many of the rap references.

I have one of those woolly hats with the ear pieces, which I assume is what you were talking about before all the rap stuff which I, despite being well acquainted with It Takes A Nation ..., am to be honest not especially interested in. I don't imagine you'd write a piece about me damning me for wearing the hat though, because I am a fat, white man. We are supposed to wear these hats.

Picking up on something else, what the fuck is with rappers etc. being into Coldplay anyway? The only lyrics in the world which manage to make Bono sound like a poet by comparison? That epic one note guitar riff that makes EVERY FUCKIG SONG build to the same climax as the last? Finding a new sound every three years and making exactly the same album as the last? The least charismatic Rock Stars ever, the platinum selling band where you only know one of their names and wouldn't recognise any of the others? WTF. Coldplay are the band of this decade just as Jordan is the celebrity and BB is the TV show. All. a bunch. Of wank.

This blog contains some of the most important writings of the 21st Century mayne. When your a old dirty bastard bum living in a Northern town with your live in girlfriend Stacey, someone will unearth this shit and publish it.

DJ, i'm sure 2shin will agree with me here when i say that you're better than hats worn by the post-Channel-U version of Blazin' Squad and Glastonbury go-ers.

But my ears get cold.

A normal beanie minus any kind of flaps will do the same job.