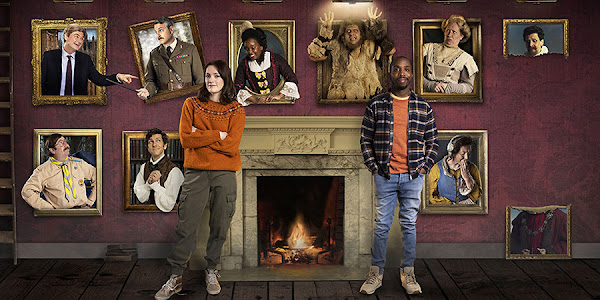 Obligatory wrap-up post of those songs I've played most during the month when the U.S remake of Ghosts turned up on British TV. Gotta be the worst American remake of an non-American sitcom since the U.S version of No Activity, right? Damn, son - CBS have turned the best modern British sitcom into The Big Bang Theory with ghosts instead of geeks.

Other notables: Saweetie shouted out D-Lo and P-Lo on the sole highlight of her new EP; I'm hoping that this video is a hint that Homeboy Sandman & Edan are finally gonna drop the other songs they recorded together; can't wait until Fall Semester by Da PE Teacha goes viral; can you guess which classic Messy Marv song gets flipped on MzA1's Playin' Wit You Heaux?

Other stuff: I upped the zipfile for my Eatem compilation; EttelThun finally put his book up for pre-order; Party Sparty on his favourite Hitchcock inspired movies.

PS: still looking for Seiji Oda's virtual cassette exclusives if anyone has them
Posted by Kelvin Mack10zie at 13:00

Another Homeboy Sandman and Edan collaboration would drop nicely right about now.

Listened to another bland Nas tape but was pleasantly surprised to find the first Nas song I unequivocally enjoy since "Reach Out" in "Thun".

Also thank you for turning me into a Homeboy Sandman fan. I never would've thought that could happen, but here we are. I have been unable to stop listening to Satellite, Boy Sand Tambien and Fruit Day 1 (and A! to a lesser extent) for a while now.

Homeboy Sandman AKA the temporary new King Of New York™ until Max B comes home.

R.I.P. Max B and Free Stack Bundles every day, all day.

Need to bring the Martorialist clothing line back.

^^ nice reminder that I'm hoping to receive this mug for this year's secret santa:

CorpsC here: joyful to see unexpected "Ghosts" love on here, my elderlyish parents got me into it and now I've got it on repeat. Not exactly hilarious comedy but weirdly comforting. Same story with Detectorists. Robin the Caveman is GOATed.

Corpsey, it's the first show to give me the same feelings I got and continue to get from series 1 + 2 of Round The Twist.

How can I get you those Seiji tracks? You gotta email u can share here? Really it's only 2 brand new completed tracks, one new track with an open spot for a feature, an alt version, an instrumental, and some fragments. I think he did another round tho that I didn't get in on. Regardless, one of the new tunes samples "how deep is your love" and it's glorious.

action bronson from round the twist said...

the two most memorable eps of that show:

1. a ghost or something got into one of the kid's pisses so he could piss higher than the other lads at school
2. the scarecrow episode which traumatised me

Jmil - can you put the 2 new tracks in a zipfile and up it to mediafire? If not, drop your email addy (I won't post the comment.)

I'm glad I'm not the only person who likes that song.

I've only just realised that Jmil and Crimedawgbylaw aren't the same person.