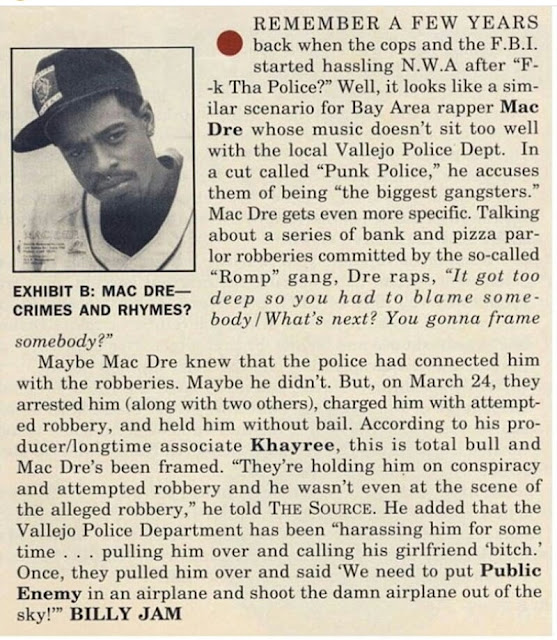 Billy Jam's HipHopSlam YouTube page has got more gems than a sunken ship. Best of all, there's the time Mac Dre & Khayree turned up at Billy's KUSF radio show in 1991 and performed an acoustic version of Times R Gettin' Crazy with Dre in Furly Guthrie mode and Khayree pulling strings (no A-Wax.) Forget drumless boom-bap, it's all about drumless mob-slap:


Billy's also uploaded a handful of electronic press kits Noo Trybe Records sent out in 1994 to promote The Bounce Squad, Diezzle Don & Tha Govenor, and The Luniz. The latter's epk is somewhat infamous because it's where they first dissed Too $hort:


Billy later broke the news to Too $hort during an interview with the Dangerous Crew and was the first to glean a response from $hort before the beef went to record:


There's a Black Artists Against Drugs PSA by Public Enemy with Chuck D in the Minor Threat t-shirt Glen E. Friedman gave him and the hilarious spectacle of Flava Flav warning da kidz not to get high:


Lots of other good stuff on there and very active recently, so one to keep an eye on.
Posted by Kelvin Mack10zie at 10:20

Oh shit! This is good news

In 1995 or 96 the Luniz were on a famous live french tv-show (Nulle Par Ailleurs), on a promotion tour for Operation Stackola, and apparently during their rendition of I Got 5, Numbskull had the brilliant idea to pull down his pants to moon the camera, which caused quite a stir on the set.

I guess it was still all good because they were invited again a couple years later to perform Is It Cool.

I've been trying unsuccessfully to find footage of it online, but I hope it'll show up at some point.

Nowt more annoying than classic TV performances from back in't day never making it to the internet. Still waiting for somebody to upload Pharcyde doing Ya Mama on the British show The Word meself.

Luniz clip makes me wish they'd shot a video for Put The Lead On Ya. 2nd best song on that first album, imho.

this channel is packed with goodies thanks for the heads up

(I've never liked all white coats of any sort.)

Only good acoustic rap song ever

How is there still dope Mac Dre that I haven’t heard?