Why couldn't God have taken Copywrite instead of Camu Tao???? 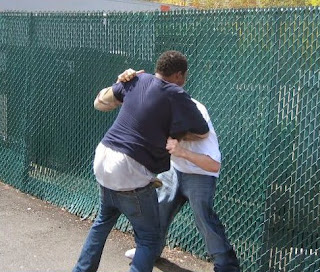 (Before we get down to the nitty gritty, let's take a moment to reflect on Camu Tao's outfit in the infamous picture of him whupping his former MHZ groupmate Copywrite. Dook was wearing slim-fit sagged jeans in 2005 B.C (Before Cool Kids), which makes him an ever bigger sartorial trailblazer than KanYe Pest!)

Why did it have to be the most talented rapper from the MHZ crew who was taken back to the essence, yo? The best song MHZ ever made was when Camu Tao got his own solo track on their 2nd 12" and rapped in tongues as though his brain had been invaded by Korton from the planet Koldas:


Really doe, it's all luv to Copywrite because he's one of the greatest internet punchlines of all time. In fact, Copywrite has given the internet more LOLz whilst takin L's than any rapper not named Hell Rell: from Esoteric exposing him for sock puppeting on UGHH.com, to the aforementioned incident where he caught a beatdown from Camu and managed to break his own finger on his brass knuckles, to the Skribble Jam ding-dong which resulted in him getting knocked the fuck out by ol' glassjaw-ass Icon The Mic King.
Posted by Kelvin Mack10zie at 19:21

He definitely sounded better than Missy over Gossip Folks. Not Luda though.

Was hoping this would be an expose on how Camu could've flourished in this age and was kinda sorta maybe like proto-Danny Brown, but ace post title either way

"Cereal Carpens" is probably the only nerd rap that is as good and funny as it thinks it is.

" the Skribble Jam ding-dong which resulted in him getting knocked the fuck out by ol' glassjaw-ass Icon The Mic King"
I was there that year; how do you know about that? This is before the internets was the minute information mill that it is now. That's amazing.

I just remember it being all over the 2 message boards I read at the time.