Per request, the Who Dem Boys? album by T-Bo & Mike Da Hustla : 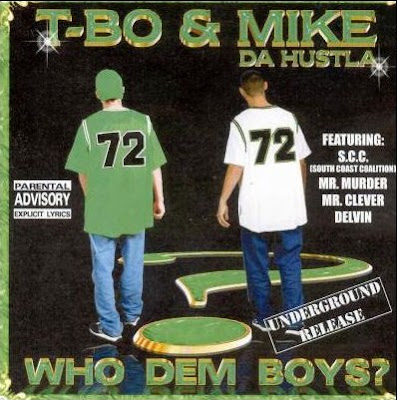 ~~> DOWNLOAD HERE <~~
Before he signed with No Limit Records as Master P's token Great White Hope and ended up pursuing a side-career as Lil' Romeo's butler, T-Bo and his then-producer/Rapper cohort Mike Da Hustla pioneered the genre of rowdy saltine moonshine-Rap when they emerged from a Louisiana trailer park with $25 rhinestone grillz in their mouths toting copies of Who Dem Boys? at the turn of the millennium. Cracka-Rap trailblazers on multiple levels, also note the racially ambiguous album cover where the duo pose with their backs turned in a devious attempt to fool us that they might be Mexican rather than a couple of hot dog brine smelling caucazoids; a trick adopted by every white rapper on MySpace trying to disguise their ethnicity a good 4 years later.

Lamenting that "it's hard out here on these streetz bein' white" and referencing such quintessential Louisiana motifs as ‘solja Ree's’ over Mike Da Hustla's tinny-yet-strangely-punchy beats, the original peckerwood thug-Rap duo here are akin to a whigga-core TRU minus one of the Miller brothers or even a downhick Mobb Deep with the backwoods of Baton Rogue replacing Queensbridge as their pitiless milieu. Album highlights include the savagely anthemic title track, one of the greatest Drag ´Em "N" Tha River homages in Bad Ass White Boyz, the Phil Collins-interpolating ballad I Hear Bullets, and T-Bo's solo masterpiece #1 Headbusters where "the gun-blazin' caucasian" explains that violence is a dirty job but he'll still bust your melon open if he catches you talking shit.

Now impossible to find on CD and never uploaded to the internet in full (alas this is missing the intro, the outro, a radio version of I Hear Bullets and a Screwed version of Dirty South Anthem), Who Dem Boys? is still the definitive rowdy saltine moonshine-Rap opus as well as a minor Baton Rogue classic, so it's in dire need of a remastered reissue with liner notes by Dave Tompkins, Percy Miller and Frankie Tha Lucky Dog, plus a bonus CD-ROM of the pictures from Mike Da Hustla's sadly extinct Geocities page. Until that happens, this post will just have to do.
Posted by Kelvin Mack10zie at 09:58

don't know how but had lost it so thanks for the re-up.

and for the review for that matter, you're really the most articulate when it comes to the rap's best redneck duo.

Here's hoping Mike Da Hustla stumbles on this post so I can get an interview with him.

Cheers, this was indeed near impossible to find

You're probably the only person who could ever make this post so i salute you, sir