A-Mafia's come a long way in the Rap game since he last got out of prison a couple of years back - from "I'm 'bout to trap n*ggas, slap n*ggas, clap n*ggas, snap n*ggas, jack n*ggas, white n*ggas, black n*ggas" on 1000 Grams in 2010 to bro-ing out with some very odd whiggas at the A-Mafia Day cookout on 140th Street in Harlem this past weekeend. Hey Rappers, Guidos, Turkish banter-lads, middle-aged Swedish homosexuals, Peter Andre, Denice Welch's toyboy and other wearers of True Religion jeans - is dook in the middle really the look you're going for? 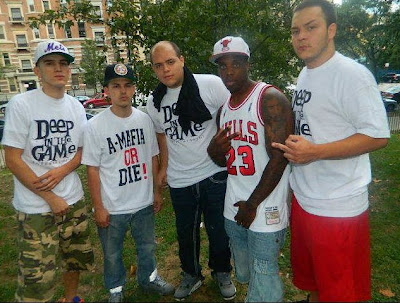 Keep it on the hush-hush, but yo' boy Brendan SODMGberg right chea quite likes that new A-Mafia track with - whisper his name - Papoose! Yes, A-Mafia and Kay Slay getting increasingly buddy-buddy is worrying, and, yes, N.O.R.E should've guested on the song instead, but I'm digging Mafia's echo-flow and how the beat sounds like a slo-mo version of Ted Dibiase; as for Papoose, his presence isn't problematic here since he doesn't even sound like Papoose so I can just hoodwink myself he's that Charlie Clips dood who said "n*gga gave 'em all his chips, Miss Pringled her" on Shine On :

How in the hell has Pap not got a load of memes to his name already? That short lived tumblr doesnt count.

harlem has come a long way when those whiggas can walk around without getting robbed.