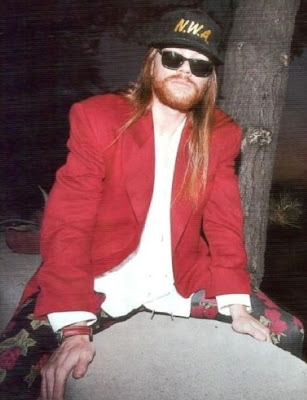 Remember when Eazy-E announced he was releasing a double album featuring a song with Axl Rose back in a 1994 issue of The Source? Of course, it never happened because Eric fluttered up to the crossroads to chill with Freddie Mercury about 6 months later in 1995 after sticking his todger in some diseased skank/getting injected by a super form of HIV evil overlord Suge got Dr. Daz Dillinger to cook up in the Death Row laboratory, so the above picture and this song from Brandon McCartney's golden-era are the closest we'll ever come to such a cross-genre collaboration :

Crap GNR Rap punz a-go-go : It's So Weezy, Betta Axl Somebody, ParaDice Raw City, Izzy Shadlin, My Michel'le, Duff McKeakgan, Use Your IlluZion One, One In Amil-lion, Matt SoRumpletilskinz.
Posted by Kelvin Mack10zie at 20:08

I'm not doing so great re: Vicky C getting engaged.

yeh couldnt believe vicky got with that clown, shits fcked.