There's only one thing to do when one of your chick friends has a stronger NWA t-shirt game than you - man up, band up, scan up and print up a very special shirt of your own using the NWA tennis balls in a box pic which the European Bol Dom P unearthed : 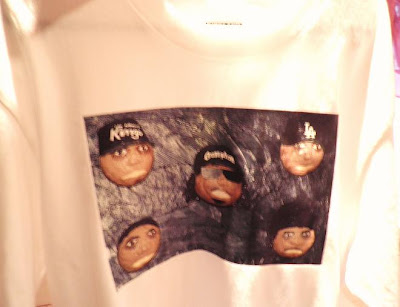 Shout outs to all my saltines who've used the "oh, I'm a fan of that Bill guy from True Blood" when approached by angry black gentlemen enquiring why they're wearing apparel printed with the word COMPTON.

And on a very related note, I just noticed that Eddi Projex & Beeda Weeda's C-Bo homaging Youtube single Gettin' G's from 2010 finally turned up in full CDQ glory on Eddi's H.W.A (Hittaz Wit' Attitude) album last year about 5 minutes after pressing publish on this post. Near-fantastic timing on my behalf :

Dom has better taste in music than Bol though.

My mother has better taste in music than Bol.