Back in the mid 90s the rapper Rakim apperared on an episode of YO! MTV Raps dipped in an orange Champion hoody, an orange-trimmed baseball cap and some orange on white AF1 Nikes. As ensembles go, it wasn't quite one of his 80s Gucci/MCM custom-made Dapper-Dan suits and it's perhaps a little too matchy-matchy in the cold light of 2009, but, nevertheless, he still managed to look like the flyest motherfucker on the planet at that particular moment in time. 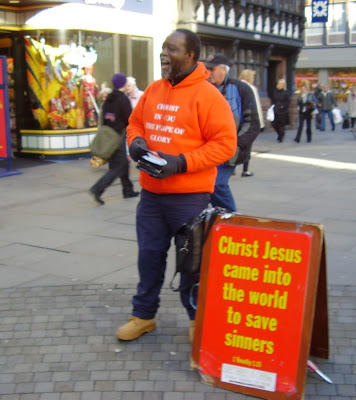 You, sir, are no Rakim and dare I venture to suggest that you are no Marvin Gaye either when you open your big gob to belt out hymns like The Old Rugged Cross in a singing voice which can only be described as an unholy miscegenation of the Vic Reeves club singer routine and ODB warbling the chorus on Shimmy Shimmy Ya.

And surely if Jesus truly does want to save you he'd have let you know that nobody who wears wheat-coloured Timbs in 2009 will be allowed onboard Noah's Ark during the next great Earth-cleaning flood, especially when even Buckshot from Black Moon binned his last pair back in 2003. Talk about "you're so two thousand and late" - step your shoe game up and get some tan coloured suede Red Wings instead if you want to ascend to sartorial heaven, bruv.

that eric b and rakim yo! used to be on youtube but like every other decent bit of mtv footage it's now been removed