The whole Byrdgang's in here like Shannon Hoon was here!

Well, not quite the whole Byrdgang, but there's a 50%/10% ratio of Purple City Byrdgang and M.O.B Byrdgang in this here posse picture from 2005: 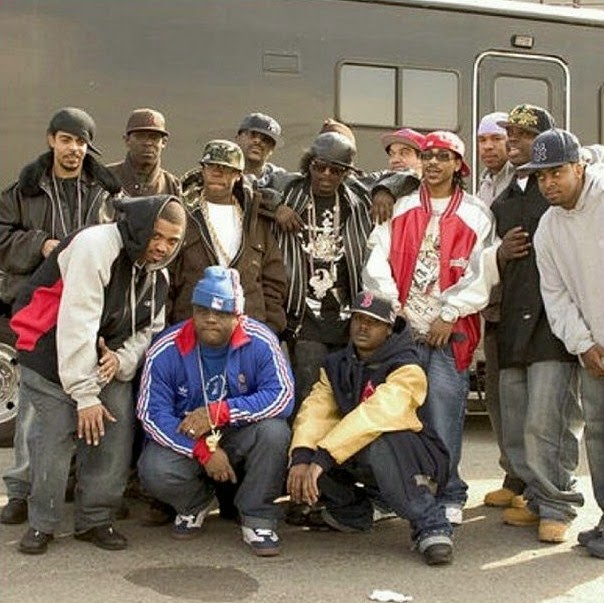 J.R Writer and Ike Eyes are also present, but I dunno if the other blokes are big-time NY drug dealers who were a crucial part of the rap landscape at the time like Killer Ben, Rap Supreme, Kelvin "50 Cent" Martin et al in the Paid In Full posse picture, or just a bunch of weed-carrier's weed-carriers? Whoever the other goons may be, this JPG is more important to the overall history of New York rap than 97% of the music to emerge from NYC thus far in 2014.

And so here's a generic list of 10 A-Mafia songs that are 2000 light years better than Bobby Shmurda's Hot N*gga but which weren't afforded the same level of attention/support because A-Mafia can buy beer legally and NYC is a city run by Ken Kaniff & Cyril Smith type creeps. As FEAR nearly once opined and Das Racist recently proved, New York's alright if you like sex offenders:

i recognise 2 of these guys...agallah and max b

Dude next to A-Mafia looks familiar too.

This gotta be the worst year ever for ny rap.

Is that 2 gun Un Kasa in the camo fitted?

Gotta admire Un's commitment to always wearing a New Era that was at least 2 sizes too big for his head.