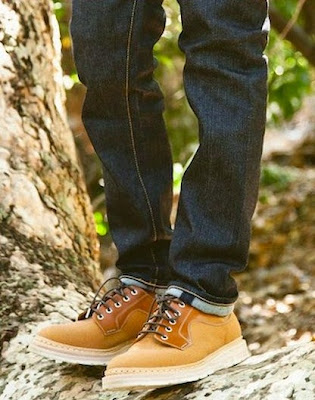 Just spotted these shoes on the Union blog's photo shoot for that recent Junya Wanatabe X Levi's collection and I want them now and shit, like nowwwwwwwww. Alas, the Union post didn't list what they are, I can't see 'em anywhere on the Union webstore, and none of my IRL & internet friends who follow #menswear can identify them either.

Rap internet, you're my last hope here. Tell me what these shits are so we can resume normal service and get back to discussing Sage The Gemini punchlines or the time Tarrie B appeared on an episode of Jukebox Jury after Booty Collins, Pat Collins, the bird who played Kerry Bishop in Neighbours, and the bloke from New Order had voted Murder She Wrote a hit:


This clip would be total Martorialist catnip if it weren't for the fact that New Order were pretty rubbish other than their handful of obvious singles, and Pat Cash played a sport that's primarily enjoyed by alleged paedophile pop singers and Elliot Rogers lookalikes who think all London's working class tube workers are scum.
Posted by Kelvin Mack10zie at 12:36

Hmmm. They don't look as good in the stock pix as they do in that photo shoot :(

In the massively unlikely event that anyone from OAMC ever sees this post, plz make a full leather version with a vibram midsole.

Look like a different shoe to the ones you posted haha.