A couple of months back when winter was first beginning to take its strangehold on us, I was pondering dressing gowns. On paper, there's a certain suave comfortability in coming home on a harsh winter evening and slipping in a nice dressing gown after a hot bath, but the reality isn't quite so straightfoward if my previous two dalliances with dressing gowns are anything to go by.

That swanky silk dressing gown I copped was just too thin and I ended up ripping it after catching the pocket on a door handle rushing to answer the phone, and the thick cotton effort I replaced it with was too heavy and felt a little too....how best to describe it? A little too Karen Mathews.

I'd consigned the dressing gown to the Nice In Theory, But... section of my brain until a recent hook up of the episode of WCW : Nitro where Curt "Mr Perfect" Hennig came out to join the n.W.o resplendent in Ric Flair's Nature Boy robe in Flair's hometown of Charlotte, North Carolina after turning heel on Flair and The Four Horsemen the previous evening at Fall Brawl by slamming the door of the steel cage on his noggin' inspired an eBay assisted epiphany which led me to this : 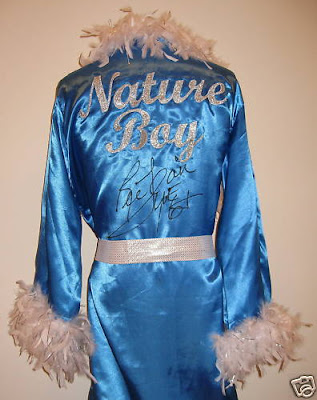 Not too thin, not too heavy and that awful feeling of being a male Karen Matthews should be nullified by the flamboyance of being a rootin' tootin' Nature Boy every time you slip it on - perfect. I 'unno, though. Maybe I'm just being a stingy cynical twat but for $299 and $20 p+p i expect something with a little more swag. Something like this : 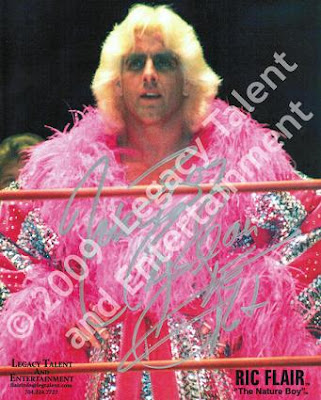 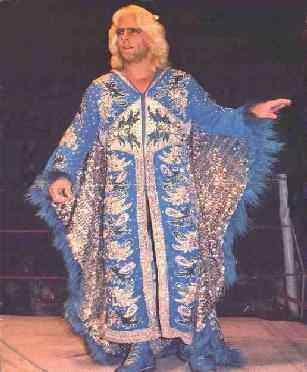 You smell me, mayn? Something that makes you feel like the ultimate space mountain dwelling, limousine ridin', jet flyin', kiss stealin', wheelin' dealin' son of a gun.

There are innumerable rap rumours which amuse me, particularly the one about Freddie Foxxx threatening to bumrape various Landspeed Records staff with a baseball bat for non-payment of royalties and the recent salacious one about Cage's latest confused emo-mess of an album possibly bankrupting Def Jux to the tune of 200 grand, but my personal favourite rap rumour ever has to be the one about Kool Keith coming out on stage in a silver mullet wig, a Nature Boy robe and a fake nose on Ultramagnetic's tour of The Four Horsemen LP. Whether it's true or not doesn't really matter, as it's all about the mental images it conjures up.
Posted by Kelvin Mack10zie at 19:08

Flair is the best.

I think he says a mile long, and not on my lawn.

I think I might need '80s wrestling knowledge for my ever-increasing frame of reference.

Watched Wrestlemania III the other week, but this might just have inspired me to 'dig deeper'.

I think it was Tony Yayo he caught, but chinese whispers over the years added Fiddy too.