Bloggin' in my old school 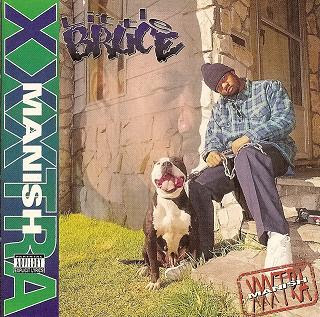 Thanks to Discogs.com for alerting me to Little Bruce's XXXtra Mannish album a while back when searching for tunes that Mike Mosley had produced and/or pre-1995 releases on E-40's Sick Wid' It Records imprint, and thanks to my pal for procuring me a copy of Bruce's Mobbin' In My Old School 12" for Xmas, 'cause this is a much better present than that PS2 add-on thingymebob you bought me for Xmas in 2004 that I never used because I only bought a PS2 to play GTA : San Andreas.

You can never have too many uses of Funky Worm, can you? Especially if it's used alongside Joe Tex and Isaac Hayes samples first used by NWA and Compton's Most Wanted.

Anyway, from 6 In The Mornin' by Ice-T, Boyz In The Hood by Eazy E, and Act A Fool by King Tee in the late 80s, to Steady Mobbin by Ice Cube, Let Me Ride by Dre and Gin And Juice by Snoop in the early 90s, many of the best west coast gang$ta-rap singles have been day-in-the-life narratives which seemed to be conceived primarily for video treatment, and this tradition was continued with the likes of California Livin' remix by Mac Dre & Coolio (a different Coolio, but let's play a game of taking sides : achieving legend status after getting shot dead in Kansas Vs. sharing a house with washed up UK celebs where you get to grope Ulrika Johnson and her with the funny name who used to be in the Sugababes), 4 Deep by C-Bo, Hot Sunny Day by Celly Cel and Bruce's Mobbin' In My Old School from '93 - '95. If you live in a drab sexless country like the UK where mediocrity is celebrated, and where the long winters are colder than Horace Pinker's soul and the summers are usually a couple of days of sunshine sporadically placed inbetween weeks of drizzle then seeing videos of cadillac driving 18 year olds frollicing with scantily clad honeys in the pools of their backgardens seemed exotic, and if the glamourous future predicted in the ABC, Duran Duran and Prince videos of the 80s weren't going to arrive just yet, these seemed like a pretty good stop-gap.

Such videos were also great sources for sartorial inspiration as early 90s west coast gang$ta-rap was the greatest era of rap fashion, but, eh, Bruce doesn't quite have the physique for a wifebeater, his alternating between having his pants pulled up to Pete Rock on the cover of Mecca And The Soul Brother levels one minute, and then emo-kid hanging below his ass cheeks levels the next isn't really working, his hairdoo is reminiscent of the ghost who lives in the public toilet in series 2 of Round The Twist, and WTF is the tucking of his pants into his socks like some British raver circa 1991/1992 all about?

Still, Bruce makes up for any clothing faux pas in the Mobbin' In My Old School video with his Footlocka Crew track on the XXXtra Mannish album (handily on the B. side of the Mobbin'.. 12"), as it's like Cube's A Gangsta's Fairytale and GZA's Labels gave birth :

See, I told y'all rappers from the Bay make the best tunes about gear. If only he'd have known that in 2009 Footlocker would be the dumping ground for every generic Air Force or Air Max, and the only place on the planet you can guarantee to hear the entire catalogue of Akon anytime you happen to visit.

Finally, I suppose we should end with the best song on XXXtra Mannish, Fuck Little Bruce, which features fires shots at Mac Dre, and which was the song responsible for starting the whole 90s beef between E-40's neighbourhood and Mac Dre's neighbourhood. Now this is some twitchy, Seinfeld theme bassed, Bay G-Funk shit :

I finally managed to pick this up the other day on CD for a cool £5 in Brixton!

Great breakdown of a great album.