Because you can find Van Damme doing Leno in '93 to promote Hard Target on there :

Topics covered during the interview : skiing, name swapping with friends, flower arranging, ballet, the cultural differences between European action stars and American action stars, bringing John Woo ("he's sorta like the new Peckinpah..") to America, the morning glory-inducing properties found within oysters, how sex is perceived in Asian culture vs. how sex is perceived in the western world, Van Damme's guerilla marketing technique for his early movies where he'd bumrush movie theatres to badger them into showing his trailers, and how a lack of budget to create big explosions on Bloodsport led to him having to create the thrills via his own body in the fight scenes.

And he's absolutely right on the last point, because what makes Hard Target my favourite American action movie of the 90s aren't the elaborate set pieces or any of the whopping explosions, but the little things : Van Damme's roundhouse kicks and dexterity, his amazing mullet and double-denim outfits, Lance Henrikson psychotically playing the piano, Van Damme punching out the snake, Arnold Vosloo's character being named Pik van Cleaf, Van Damme cleaning shop with the upside down pistol, Henrikson's expression after Van Damme puts the grenade down his kecks, the list goes on and on.

"Poor people get bored too!" 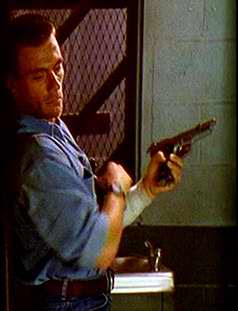 Join me as i fire up the iPlayer tonight for the first episode of the second series of Are You An Egghead? The first series featured various hardened quizers familiar to any Mastermind or Fifteen-To-One (R.I.P) aficionado, and was easily the finest tv quiz show of the decade. So let's hope the new series features the cream of the quizzing crop, by which I mean, a bunch of possibly autistic spods who were last seen being eyed with contempt by Vicki C on Only Connect.
Posted by Kelvin Mack10zie at 20:28

That's my favourite exchange in the whole movie.

Yo, when it comes to stalkable female quiz show mainstays, you feeling Jenny Ryan?

She looks like if you fucked her on the upswing of her bipolarity she'd be a straight 9/10er.

Jenny is to quiz shows, what Tray is rap blog comments sections.

She's a 9 even on a bad day, and she has loads of inside gossip on CJ.

Pretty much wife material in my book.