A brief guide to the 4 good moments from C.L. Smooth's solo career 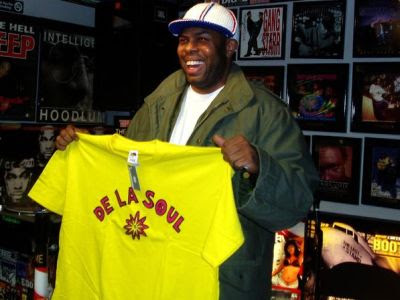 So, I caught C.L. Smooth's show in the 'pool a couple of evenings back. Not exactly the Pete & C.L. reunion show in London from 4 or 5 years ago, but a fine evening after a brief readjustment of expectations. The Pete Rock era stuff was greeted with scenes of rapture, while his solo era stuff begat puzzled yet polite applause, but reminded me that his post-Pete solo career actually started quite promisingly :

C.L. Smooth - Such A Long Time

His HipHopSite exclusive very first noughties solo track from 2005 has ended up being a long since forgotten track in the Mp3 leak age which barely even shows up on Google. Shame, 'cause it was a vintage Heatmakerz production. Whatever happened to The Heatmakerz anyway? They bettered KanYe and Just on the 2nd best NY rap album of the decade, and this tune from their '07 producer album The Rush was my shit. Lord knows Cam'Ron could do with some of their beats nowadays.

As the decade crawls to its close, there are two contenders for rap interview of the noughties : the one after Daz won the court settlement for unpaid royalties from Death Row where he mercilessly taunted Suge, and the completely out-of-the-blue CL Smooth one after Pete & CL's successful reunion which bore the much loved Appreciate and live shows where grown men were reduced to tears when the T.R.O.Y horns came in ( I've always prefered All Souled Out and Skins meself) where CL spent its duration alternating between calling Pete a fucking faggot and pleading for him to produce some of his solo album. Pete was never going to comply, so CL did the next best thing and gaffled one of the few non-ZZZZworthy beats from one of the Petestrumental albums for Bars Of Fury and ripped that shit. As the only good remix album of the decade proved, you cannae go wrong with Al Green samples.

When CL's American Me album arrived it was as dull as you'd imagine a 2006 C.L. Smooth solo album minus any Pete Rock beats would be, but it'd be unfair to deny that it included a couple of bangers. In fact, I'll take these two tunes over the noughties Pete and C.L. tracks like the aforementioned Appreciate, It's A Love Thing, Back On The Block and their remix of Mary J's Family Affair. Let's just pretend that Shine On Me/Climax 12" never happened, eh? 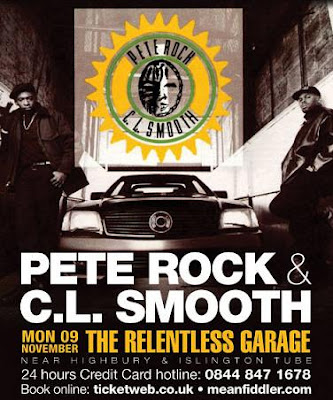 So what exactly is the deal with this reunion show in London next month? Have they squashed their beef and, as C.L. cancelled his London show the other night, what are the chances of both of them actually turning up for this?
Posted by Kelvin Mack10zie at 19:16

you gonna come down for the pete and cl then?

Depends if you'll put us up and if both Pete and CL will show up.

Yeah, I saw tickets being sold for a Pete and CL show.

I don't have a lot of faith in their ability to create good music anymore, but if they tour again, that would be dope.

Barz of Fury is fucking dope.

I reckon they could probably knock out a decent tune or two (ie. CL would've sounded perfect on that We Roll track Pete dropped a couple of years ago) but, yeah, they definately should attempt any sort of album.

That goes for pretty much anyone else in any genre who's reformed to tour over the last 5 years, mind.

getting back from North London on a Monday night will be a fucking mission but I missed the jazz cafe show so i might have to reach this.

as far as 00s CL tracks go, 'Magic Hour' on AZ's 'AWOL' album is decent (if you like sped up soul samples)

I love Magic Hour..apart from CL's verse, which is a bit all over the place.

Though i suppose it's not the easiest beat to rap too.