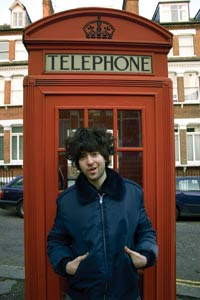 The super scientific smart-arse Jewish Percee P with scatological jokes - not a particularly tempting notion on paper, but Edan's music is undoubtedly thee dookie when banging through ya speaker. Edan found his niche in Rap's ecology with top quality even though so many of his best songs weren't included on either of his official albums, so I've made a compilation of my personal favourites. Effortless emphasis on the retro-futurist auteur tip, this playlist is designed to piss on a pessimist. Basically, don't front on the Portnoy!

It's a pity Edan & Skillz Ferguson only recorded three tag team tracks together innit? Edan dubbed himself the One Man Arsenal on some Robin Van Persie circa 2008/2009 type shit, but his back-and-forth chemistry with Ferguson was always pure Double Trouble energy.

Plz excuse the slightly tinny sound quality of those first two tunes. The petition to get a remastered reissue of Edan's 1999 debut CD-R Artchitecture starts here! Mike Lewis, where ya at?
Posted by Kelvin Mack10zie at 13:11

Edan deep cuts on the stereo, Rab C. Nesbitt episodes on the telly.

Not super familiar with Edan, but I liked Real Bad Promo a few years back and I know that you've been riding for the remix to Emcees Smoke Crack for ages now. Will peep.

Run That Shit! is one of my fave songs by him but that's on Primitive Plus so I couldn't include it here.