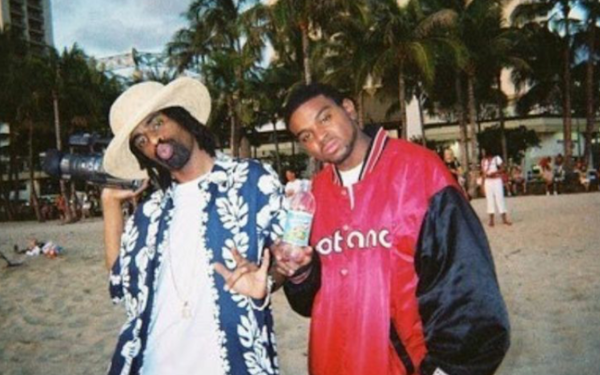 
Mac Dre · Doin' What I Do
Every year I come across a couple of Mac Dre songs I'd previously slept on and 2020 is no different; first there was the acoustic version of Times R Gettin' Crazy and now there's this hubba knock from that dodgy Mac Dre's The Name album. Ain't gon' lie, first time I heard this song I sat there sweatin' bullets expecting an uncredited guest verse from some Gilligan pill-carrier like BA or Miami The Most to spoil it. Praise the Lord - Hallelujah for some uninterrupted guerilla gurp from Furl Hawaiianshirt.
Posted by Kelvin Mack10zie at 16:20

This song was in Treal TV I think.

I love Mac Dre for that same reason you wrote. Any other keepers on that album for you?

There's a buncha annoying guest verses on damn near every other song unfortunately. Half of them uncredited which is even more annoying.

It's the soundtrack for Mac Dre's remote-control boat donuts. https://youtu.be/tyWNtOVXNmk?t=75

Ben, I'd go for Ronald Dregan because it's his most consistent later album imho. And if you favour Dre over Khayree beats then the Musical Life Of Mac Dre Vol 3: 1996 - 1998 compilation has some of my fave late 90s Dre songs.

Young Black Brotha - The Album is sick for sure, but even that's missing a few essential songs from his 3 early EP's. For example, Mac Dre's The Name and Livin' A Mac's Life from his first EP really shoulda been on there.

What's wrong w BA? Aside from being a tout obv, snitching isn't cool. always liked his features from this era when every other person from the bay incl Yukmouth had this weird shouty flow where it was like every sentence ended w a question mark

Went nuts last yr tryna be a Mac Dre completionist n this was on my 2000-01 playlist for sure.

Stupid doo dumb, heart of a gangsta n Al boo boo are my favs I think, the YBB album is missing way too many imo the ones you mentioned plus 93 n it don't stop. The khayree comp is a way better shout for sure

Another reason why I like Ronald Dregan is the distinct lack of guests on there.

On a different 3xkraxy note, agerman has been exclusively making Christian rap since the late 00s n some of it kinda slaps sorta knocks

Gotta be said the likes of them romper room comps, Collab albums etc are kinda worthless cos of the weed carriers. I love PSD tho, way better rat rapper

J-Diggs finally paid penance for all his unnecessary guest spots on Dre songs with that amazing What Would Dre Say song.

That DJ Vlad interview with J-Diggs from I think last year was kinda nice. Also E-40 spoke on Mac Dre and why they stayed out of each others way on his channel. I'll always listen when it's Mac Dre related. I think Vlad's had the entire Bay Area on his YT by now.

Since Vlad and A-Wax have squashed their beef, he should have 'Wax go on there and talk shit. It'd surely be more entertaining than 'Wax's recent music.

^ That wouldn't be too difficult indeed. Seeing as Vlad often has relatively obscure artists on there, I wouldn't bet against A-Wax showing up one day.

A-Wax bringing out the paperwork on Husalah (is this beef ever going to die?) would be golden.

Lest we forget Vlad initially played a key role in the A-Wax vs. Husalah beef.

J-Diggs' Rompaugraphy 1, 2 and 3 is the best J-Diggs (or anyone else) has ever done for Mac Dre.

What Would Dre Say is a more fun song, though. Diggs got Dre's tone just right and it genuinely sounded like he'd found a lost notepad of Dre's lyrics.

Nef The Pharaoh is still trying to be Dre.
https://youtu.be/sdhBOXO88yA

Thought that was Ezale with him for a split second there 😄