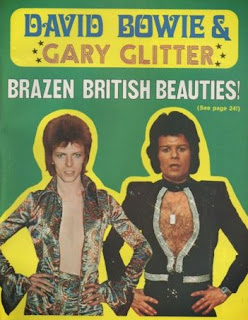 R.I.P to the U.K's second most notable thin white Dave, a man whose greatest artistic achievement was letting Suga Free interpolate Fame for the track which all true Freelievers consider an Army Of Darkness-style sequel to parts one and two of Why U Bullshittin'. God should have never let you do dat to the 3rd Stooges album, Dave, but you're forever okay with me for signing off sample clearance on this Suga Free ode to his O.G baby-momma who supposedly provoked him into becoming a pimp:


Suga Free - Allergic To Bullshit
(From Smell My Finger album; 2008)

Just sayin', bruv: Suga Free is a more complete artist than Marvin Gaye because Allergic To Bullshit manages to accomplish in a single song what Marvin took a whole album to nail with Here, My Dear.
Posted by Kelvin Mack10zie at 11:52

Email ThisBlogThis!Share to TwitterShare to FacebookShare to Pinterest
Labels: dropping like flies, not-rap, rap, tv blues, why you wanna do that luv huh?

And that is why rappers are the best.

Bowie fan or not?

Ain't gon' lie - I'm one of those people who'll hear the Let's Dance intro in a bar and then go for a piss or a pint if Bowie comes in instead of Ma$e.

The Labyrinth soundtrack is the only David Bowie album I've ever heard, tbh.

Ziggy from The Wire Stardust said...

Same here with the Labyrinth album. Had it on cassette...

Dissing both David Bowie and Marvin Gaye in the same post, you are a little rascal, aren't you!!

I like Hear, My Dear a lot. I just think Suga Free topped its essence with a single song.

Where's the Mark B tribute?

He was a decent producer tbf. Always liked this tune by Missin' Linx.

He should have given more beats to Missin' Linx because their EP was shite other than M.I.A and What It Is.