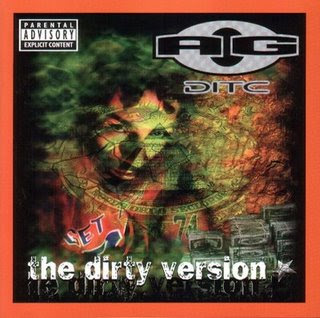 Runaway Slave was a fine album ('s all about More Than One Way Out Of The Ghetto and He Say, She Say rather than any of the singles), but I'd offer both Party Groove/Soul Clap and Full Scale as proof that the EP was the format which best suited Showbiz & AG. If you're still not convinced (and please don't even try and tell me that Goodfellas is their best release) then the Live Hard digi-7 tracker they put out a couple of years ago is further evidence that even at this point the duo can still knock out a pretty effective project together within the framework of an EP, because the title track is quintessential D.I.T.C.

Inspired by the news that Fat Beats NY and LA are set to close, I've spent the past few days digging out records bought on visits to the NY and Amsterdam stores, including AG's The Dirty Version LP from 2000. I'd not listened to this in a good 5 years now, but, yep, my feelings about it from a decade ago still stand : a handful of absolute joints, but like so many other albums by old man NY rappers around the same period it suffers from too many ill advised attempts to ape Bad Boy/Jay-Z and a plethora of unneeded weed-carrier verses. Still, at least we were spared the inclusion of that song he did with Mancunian trip-hop hack Aim, eh? Man, remember those dark days in the late nineties when you'd have British producers being interviewed in HHC talking about how Stunts, Blunts And Hip Hop was their blueprint for making music and how they'd secured AG and YZ guest spots blah blah blah so you'd check their stuff out and, without fail, it'd sound like fucking Howie B or some Skint Records shite like REQ?

Since it seems a shame to let those handful of classic D.I.T.C moments get lost inbetween a myriad of faux-jiggy tracks, shitty Ahmed beats and Wali World guest verses, let's send this album to the sauna to sweat off its flab and emerge as a lean classic AG EP. Drop It Heavy with KRS & Pun is a D.I.T.C classic (and one of the last bearable KRS verses) but it's disqualified because it was already on Full Scale; I used to really like the Diamond D produced No Where To Go but I'd rather listen to the old Money Boss Players track from Ghetto Chronicles Daily which used the same sample nowadays; and I really like We Do That Too but accept that it doesn't really fit into the classical D.I.T.C mold I'm going for here. That leaves us with these to collate into a 4 track affair :

While AG's attempts at recreating LOX songs yielded some pretty appalling results, his stab at Whoa was much more successful. All you need is some Buckwild production which goes Du-Du-Du-Du-DAH-DAH-DUH-DAH, a recurring phrase to use as a washing line to hang your lyrics on and, et voilà, you have AG's best solo song that Just Blaze admitted "inspired" (translation : was completely ripped off for) Saigon's The Letter P 5 years later. This one is a cheerful reminder that back in 2000 there was very little difference between the various sub-genres of NY rap, with D.I.T.C jams, Jay's harder cuts, Bad Boy anthems like Whoa or Bad Boyz, street bangers by M.O.P and Screwball, and more esoteric tunes by Godfather Don or Scaramanga all happily co-existing together on Stretch Armstrong radio shows. That line where AG informs us that he's "seen The Matrix" on an LP released months after its cinema run sounds so quaint now in the era when we get Slim Thug's thoughts on Inception mere minutes after the credits have rolled :

Show was absolutely killing it with the production during D.I.T.C's indie golden-era from 1997 - 2000 so, as is always the case in a genre as haphazard as rap, his one beat on AG's solo was absolutely terrible. Like, worst-song-on-the-entire-album terrible and this was an album which included Rude Awakening (props on whoever uploaded the video to this for sneaking titties onto Youtube, btw). Thankfully, Lord Finesse came to the rescue with a couple of beats which became Ghetto Dwellas posse jams, with the latter also being the home for some vintage Joey Crack rapping from when Armageddon was ghostwriting for him. Neither are as good as Who's The Dirtiest? as far as AG & Ghetto Dwellas songs go, but they're both pretty great nontheless. R.I.P to Party Arty - I wonder if heaven got a Youtube comment section where anyone drops you a "actually, Arty won this" remark in that Smack DVD battle against Murda Mook video?

On an album which included a man almost convicted of homicide (Show), an obese man with arteries rapidly turning to concrete (Fat Joe), and a host of weed-carriers who were probably knee deep in crime (Wali World, Hehdkrack, Mr Mudd) how cruel is it that Guru - Guru! - is one of the three guest rappers from it who's no longer with us a decade later? Anyway, remember when even formulaic, slightly flat Primo beats were still brilliant? This shit is so good that I can even forgive O.C his "this verse here's better than your whole cd" line which at least 4 people had used already since Craig Mack first spat words to those effect on the Flava In Ya Ear remix.
Posted by Kelvin Mack10zie at 10:23

Had no idea Party Arty passed away. Was gonna comment on his moniker, but I think I'll hold back on that one.

Was never a fan of AG. When they released their early material, I always thought that Show was superior rapper.

I'll give him credit though, he did improve on subsequent releases.

all eye seeing is wicked.

i remember another ag song not produced by show from the 90s which was big with the bongos lot. what was that?

Ah, I know the one you mean, but I can't remember its title or who it was by. DJ somebody.

That AG song from the 90s is probably "Hidden Crate" by DJ Greyboy, a minor classic. That "Inspiration" track from the SBX e.p is fresh too. He also smashed the Halftime show 10 year anniversary freestyle session recently. Always liked the fella alot.

Awesome post even if I disagree. I liked this album alot. But I haven't heard it in a while so I'll have to dig it up.

That's the one, Spod.