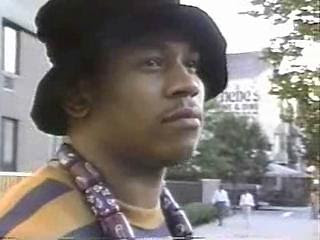 An unreleased LL gem recorded sometime inbetween Mama Said Knock You Out and 14 Shots To The Dome. Possible shots at De La and the Native Tongues towards the end, but anyone who remembers the appalling gear LL was forced to wear to fit in during the conscious era during the time of the Around The Way Girl video and his MTV Unplugged performance (the furry top hat was bad enough, but the patchwork shirts and kecks were near unforgivable) can't really blame Uncle L for his saltiness.

Does a better quality version exist? If so, hook it up for a gringo. I can't remember if it was K. Def or Dr Butcher who produced this, but it doesn't really matter either way as we can basically boil this down to being LL rapping over the classic UFO by ESG sample, which is such a magnificent break it still sounds good being rapped over now as DOOM & Raekwon proved last year, and it's pounding eerieness can make even the most average weed carriers sound like G. Rap and Kane on The Symphony as anyone who ever heard Realms Of Junior Mafia can attest.

I always thought it was weird how old hip hop djs and producers gravitated towards UFO by ESG considering the rest of ESG's early 80s catalogue. I mean, great song 'n' all and the way they slowed the record down to create something altogether otherwordly was a stroke of genius, but wouldn't you think that other ESG songs like Dance and Moody are way more ripe for block parties and sampling? Even student birds in the UK like Dance since it was in that car insurance advert.
Posted by Kelvin Mack10zie at 16:32

'Year Of The Hip Hop' is a great track. dont think too many heads know about this one. been after a full version of this for a long time but seems like this rip off Westwood is all there is.
I heard him play it in 95 which would put it in the 'Mr Smith' era.

I reckon it was recorded much earlier than that. Where he's talkin' about "all the people who wanna talk about flowers and nettles" is clearly a dis to De La.

Great find! Never heard about that before.
another ong from that era is Whose afraid of the Big Bad Wolf from a fucking Disney movie soundtrack. Never found an mp3 for that.

Another LL song missing from that era is the original version of Soul Survivor, which Dr. Butcher mentioned in his great unkut interview.
He said it found its way on mixtapes back in the early 90's. Does somebody know on which tape exactly?

Fuck knows, man. You'd imagine it's gotta be on an S+S or Doo Wop given the era.

Let's try and find an mp3 of Who's Afraid Of The Big Bad Wolf before the end of march.

It's not the greatest of songs but if you have the money to buy it and the means to convert it into mp3:
http://cgi.ebay.com/L-L-COOL-J-cd-single-BIG-BAD-WOLF-Rare-LL-Cool-J_W0QQitemZ110456604860QQcmdZViewItemQQptZMusic_CDs?hash=item19b7ba08bc
Can't even find it on itunes.
Cause I really can't find an mpr

LL is pretty lazy on Big Bad Wolf, but the video is kinda funny. Definitely one of his rather obscure joints.
Wish he would have take notes from Cube's Gangstas Fairytale though. Now it's just another Uncle L the lover song.

Well, I ripped the soundtrack from the video some time ago, but the sound is unbalanced, basically forgettable:
http://rapidshare.com/files/359428714/Who_s_Afraid_of_the_Big_Bad_Wolf.mp3.html

But "Year of the HipHop is really a gem. Not necessarily soundwise, but it's LL in top form.

Thanks for the mp3.

Slice of Spice have just pressed it on 12" http://yearofthehiphop.bigcartel.com/