R.I.P to Nate Dogg, we had to Regulate 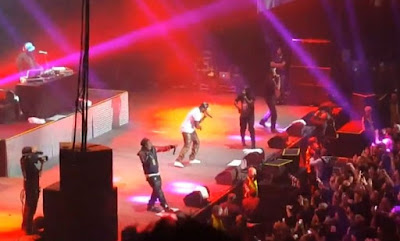 Most insane part of G-Unit's show in Manchester last night? DJ Chubby Chub cutting out Nate Dogg's hook during 21 Questions so 20,000 people could sing it in unison. Most unexpected part? Instead of throwing Kidd Kidd a bone and lettin' him perform a solo song, 50 going into a medley of his verses from the remixes of Toot It And Boot It, Bitch, and UP!. Most unacceptable part? No Stunt 101 was a travesty since Young Buck was permitted entrance into the U.K unlike when G-Unit played London this played july.

KanYe may have won the war, but 50 stays showin' the rest of these fugazee A-listers how an arena-rap show's supposed to go. Like, who else but Currrrtis could have the 2 Lauren's from Liverpool rappin' along every word to a deep cut like Ya Life's On The Line?
Posted by Kelvin Mack10zie at 18:48

MY ROYALTY CHECK'S THE REBIRTH OF LIBERACE

Does 50 ever perform any of the pre GRODT stuff anymore

He did Ya Life's On The Line and U Not Like Me at this show.

Why are there only 4 of them onstage?

Yayo wasn't there this time.

Missed his presence too because he has one of the most distinct hype man voices ever; shit couldn't even be nullified by the terrible acoustics of the 02 Arena and he still sounded like he does in this clip.

Did 50 run afoul of the same grime goons Cam did? I was looking for a London date on this tour.

Nah, they played London back in July and 50 had so much fun he just decided to come back and cake off the rest of the U.K.

CHUBBY CHUB WITH THE THUNDER SOUND!