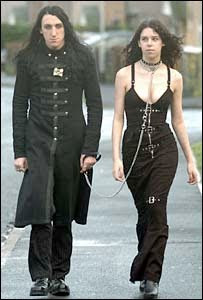 2010 is the year when The Martorialist crew are gonna start hittin' up metal clubs again. It's been 4 years since we last stepped south of heaven and the memories of masses of 14 year olds, fat birds trying to look like Dita Von Teese, and having to endure shit like Funeral For A Friend have faded to the point that we've gotten it into our heads that metal clubsb in 2010 are now populated by wall-to-wall rock chick vixens and play nothing but classic shit by Motorhead, Danzig, Bon Scott era AC/DC, Faith No More, EyeHateGod, Ozzy era Sabbath, Slayer, Trouble, Anthrax, Kyuss, various songs from the Rocky 4 soundtrack, and the n.W.o Hollywood Hogan entrance version of Voodoo Child (Slight Return).

The trouble with metal clubs is that metallers are a tight-knit community deeply untrusting of outsiders who don't wear the mark of the beast setting foot into the belly. In 1999/2000 our Silas/Carhartt/Adidas or Nike get ups were generally accepted due to nu-metal whiggatry being rife at the time, but a mere 3 years later metal had closed up shop again and our mate Gary who sported a black and red Adidas tracksuit to a metal night hopin' to pull some Korn fangirl tail was ostracized for "looking scallie" and ended up gettin' ejected by the bouncers amid accusations of selling weed in the bogs.

What to do, what to do. We were stumped until a lightbulb went off that urged us to look to our blog compadres for sartorial inspiration for the appropriate attire for the long way back from hell. On one hand, we can appease our whigga souls and get NWA-ed up in black Raiders hats, 501s and Jordans like Reza which should be acceptable on the left hand path due to an excessive amount of black. On the other, we could follow Dom's lead and use his peacocking-at-metal-gigs-in-non-threatening-garb technique with mustard coloured jackets and scarves.

We're not sure which course of action we're going to take yet, so as we're pondering whether or not we should buy some platform boots and JNCO-sized bondage kecks to appeal to the goth foxes instead, here's a guide to storing metal shirts on the excellent Old School Metal Shirts site. Man, metallers really are the Japanese of white ppl subcultures :

ROLLE THE ZIP BAG, LAY IT INTO A HOLE PUNCHER
AND HOLE THE ZIP PAG. THEN YOUR SHIRTS CAN BREATH 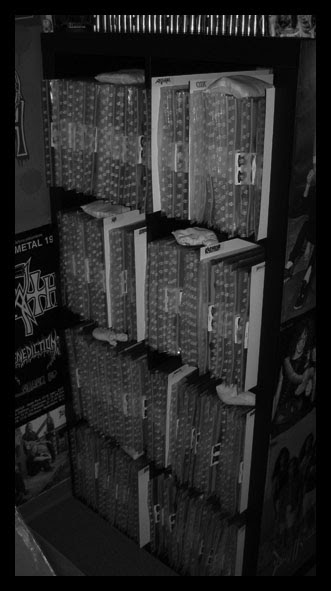 Eff a guilty pleasure. If you've never danced on a table in a shit metal club to this, your life has been sorely misspent.

Word on street is Mart that Doc Marten's are coming back in a big way. 8 hole and the er, other, bigger ones. Chicks are digging it in a big way in the smoke.

Have rock clubs finally stopped playing that fucking ska cover of "Come On Eileen" yet?

That's what we're going to find out.

'Sup Mr. Blake. Docs seem to be back in general, and not just with da hip kidz but with a weird new breed of 90s throwback metal/indie teens too.

silas was such a great brand

I hoovered up every pair of their 1999 work pants in my size i could find in Slam City and Ideal. Wish i still had a pair left in good condition.

always be the man in all black at all hours