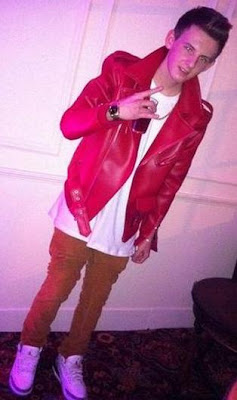 You know how Never Did by Rich Kidz failed to make much impact IRL when it should've been as big as Ca$hin' Out or Ayy Ladies earlier this year? Can someone plz wrong that right and make sure In The Car from the new Rich Kidz 'tape is the biggest ATL Rap hit of 2013 because it's everything great about Travis Porter's fruity ATL-Rap and Ty$'s Rap & Bullshit distilled into a single song :


"..and I ain't even asked you for your number
I just wanna do it in the hummer.."


Anyone who can answer what the fat third member of Rich Kidz actually contributes to the group other than dancing awkwardly in their videos wins a special prize of some minging peppermint flavoured green tea I bought by accident thinking it was just the regular variety a few weeks ago. It tastes like a pack of polo mints dissolving in a cup of warm 5 day old piss but it's very good for weight loss according to the packaging.
Posted by Kelvin Mack10zie at 20:40

I like Yung Cash but I don't think he is a Rich Kid anymore. They booted him because he was fat, presumably. I liked all the other Rich Kidz. Still fucking with what Guapo is doing. You're almost as crazy for liking "In the Car" as you are for not liking "Love Sosa" though. Boring R&B song with no Rich Kidz (or Travis Porter, for that matter) feel at all. Their obvious intention with SLT3 to mature out of the AutoTune sound was pretty stupid. The only song I like on it is "Back It Up" and we have Future to thank for that. drugmoney.tumblr.com

In The Car features the best use of a "beep beep" lyric in a song since the Ignition remix.

EXPRESS YOURSELF AND SHOW YOUR COLOR WITH BRANDON SALES AND BEATS BY DRE!!!

If this group did nothing else, they introduced the world to the great producer London on da Track