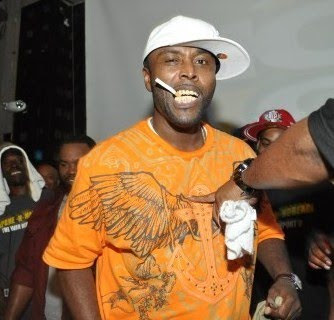 Five people in the comments Da streetz asked for a Black Rob compilation after I'd posted a few mixtape joints of his recently, so I've whipped and then zipped one up per request. B.R's actually one of the easiest currently active old-man NY rapper to assemble an anthology for since he's relatively slept-on beyond his Bad Boy singles, his catalogue stretches way back to 1991 when he recorded a demo with - of all people! - Automator, and he's still knocking out a few good joints nowadays, though that floppy monkey hat he's wearing on-stage in his latest viral-video Ventilation looks like summat Theophilus London would wear.

There didn't seem any point in including any of his main singles for Bad Boy such as I Dare You, Whoa, Espacio with Lil' Kim & G. Dep, Star In The Hood, and Ready since this is a primer for people who're only familiar with Banco Popular via those singles in the first place. Consider this collection a Black Rob sandwich which uses 1991's The Smoothness as the top slice of bread, Up North from last year as the bottom slice, and 28 personal favourites which range from guest appearances, album cuts, mixtape joints and unreleased gems as the filling. Everybody gotta eat, so tuck in:

Feel free to use this as a soundtrack the next time you shoplift a scandalously priced can of liquid elastoplast from your local chemist/supermarket, safe in the knowledge that a kleptomaniac like Black Rob would approve. Just don't hold your breath for me to hook up a Loon's greatest hits or a Best Of Mark Curry next, though.
Posted by Kelvin Mack10zie at 09:17

we hungry n u feedin us boy arf arf

"New York" is my shit!!!! Just fresh out from my bid back in October rolled thru Harlem bumpin that shit on the real the best music always reflect my life like that. Black Rob is one of the realest.

cheers , look forward to hearin it

it's on my stolen ipod son, heavy rotation

The link still works. Mediafire is just down for maintenance work currently.

thanks my nig! now need a g dep tape to go with .. peace

Re up again please. Good looks.

think you could reup this link again please?

Yeah I'll do it later when I'm home.

Oh my god! this is exactly what I've been looking for (and more), I've been trying to compile these joints but couldn't find most of them! I know you did a few times already but please, if you could re-up this it would be amazing. Thanks.

man, you don't know how happy I am! thanks a lot. it would be amazing if you did a similar compilation for G Dep.

G-Dep only has about 7 or 8 good songs altogether so there's not enough to make a compilation.

I'll do it when I get home later.

can u please re up this bro?

Yeah I'll do it tomorrow. Check back then.

thanx G , recently lost my hard drive with 500 gb of hip hop on it, appreciate any other comps u can upload too if u have the time.

I'll up the Black Rob one when I get home later, but here's some of my comps on Audiomack you can download:

Any chance you can re-up this? Black Rob is one of my favorites!

Can someone please re-upload

I'll do it next time I'm on my laptop. Check back tomorrow.

Thank you much appreciated