All is forgiven, Trinidad Jame$

When the dust has settled and the history books are written, future civilisations of this mortal coil won't remember Trinidad Jame$ as ATLanta's shitty Tumblr version of A$AP Rocky who managed to sucker Def Jam into giving him a deal. His legacy will simply read "White popped up in the All Gold Everything remix video 3 years after Code Name changed the Rap landscape forever!" 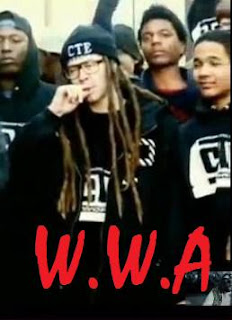 Here at The Martorialist, we attribute Jeezy's fall from grace as he struggled to get Def Jam to release Thug Motivation 103 a consequence of two specific incidents : him selling out Slick Pulla's Trapublicans party to endorse Obama and him not allowing White to hop on the All White Everything remix. A couple of years later and we're still smarting over the spectacular missed opportunity of the latter, but should Jeezy treat us to a remix of R.I.P with White playing 2 Chainz's position then he'll be da man on our streetz again, especially if he introduces White's verse by saying "take these yams, White man!"

All these thugs luv Jeezy 'cause they know that he the truth, got a weed carrier the same colour as coconut milk juice.
Posted by Kelvin Mack10zie at 20:26

I'm pretty sure this video is the first time Jeezy & White have ever been pictured together.