Get yer copy of I Got That Work out fer the lads! 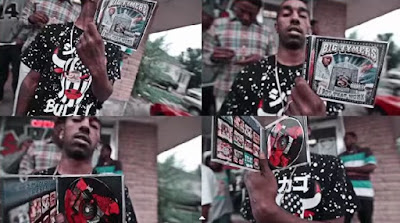 HD of Bearfaced prides himself on being one of the capital lock REALEST rappers in the Bay, and so when he bragged that he "got that old Big Tymers up in my deck" on 2014 Martorialist favourite Don't Like Me he knew he'd have to show and prove if he ever shot a promo for the song. Hope dude really does own I Got That Work from back in t'day and didn't just hit up Rasputin for a used copy to stunt in the video.

Don't Like Me was one of last year's two great Bay songs to bear an accidental Carl Craig influence. This shit sounded like a Landcruising-era remix of an old Messy Marv track, whilst Sage The Gemini's Bad Girls sounded like Oscillator being played on a malfunctioning turntable. Here's hoping 2015 is the year some Oakland producers inadvertently channel My Machines and Bug In The Bass Bin.
Posted by Kelvin Mack10zie at 09:37

HD got a haircut