Yo, Habibi - you got that joint? 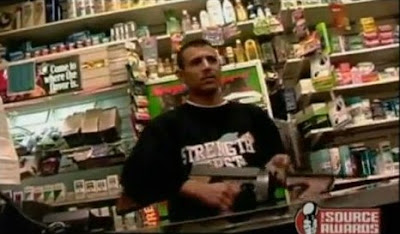 Habibi : In which our raconteur Mic Terror visits his local liquor store and shoots the shit about race-relations, religious dietary plans and racey broads with its Islamic owner over a bassline I swear is inspired by some cartoon theme that I currently can't place. Outside of The Simpsons, Rap is probably the only form of entertainment where a non-Pakistani gentleman can put on a Pakistani voice and not be ostracised for it in 2011. Take note, Anton Du Beke.

Contrary to the Soderberg-prism, there are other worthwhile practioners of non-thugged-out, quasi-everyman Rap beyond G-Side, Curren$y and Stalley; Stalley is far too earnest and dreary for my taste, I've reached a tipping point with Curren$y where I simply don't need any more music by him, and while I like G-Side, there isn't much fun to be found in their oeuvre, so I'll take Mic Terror as my official go-to non-threatening black ppl Rapper du jour, thank you very much.
Posted by Kelvin Mack10zie at 19:21

Damn the theme is some really obvious Disney film or something too. WOULDA BEEN A MUSLIM BUT I NEED REAL FOOD FOR BREAKFAST - this dude is the real.

Last paragraph is right. Am I the only one who likes the newer G-Side shit less? They were always well earnest but its been amped up heaps(maybe its cos they enunciate more so I can hear the cheese they're saying, dunno) as well as the constant internets references- I'm not tryna hear the words "so i hit the minimize button" in my fucking rap music.

I haven't heard the new G-Side album yet, but the Burn One joint No Radio was by far my fav' song on Cohesive.

this (the dipset source awards medley) is the best live performance ever, i cry everytime i watch it

the cartoon theme is Inspector Gadget i think

The most important TV performance since Elvis's first appearance on national TV in 1956.

Oh, I meant Cohesive, haven't heard the new one yet either.

Actually I'm starting to suspect its Soderberg holding them up as some great alternative to gangsta rap is whats putting me off them, which is weird cos I think I first read about them on his blog.

'in the hall of the mountain king'

'no radio' was also my favorite joint, which is why i'm glad that you aren't as into boldy james as I am; having the same favorite G-Side, Bubba Sparxx and jacka songs was starting to make me feel redundant.

between this and "still arrogant," I think themartorialist readers need to bone up on their classical libraries y/h

Man, look at David showing off here just because the only classical pieces of music some of us know are from movies like Fantasia, Allegro Non Troppo and Apocalypse Now.

remind me what that "this bassline's stubby etc" comes from

I also find G-Side boring these days. The production is cool. But the constant "OMG I understand the internets", and "Just got back from Norway / everyone's jocking our business plan" is grating. They're too self conscious about inserting themselves in the lineage of Outkast and their counterparts (Ball&G, UGK, etc.) when they haven't done anything nearly as interesting.

Yeah, that's pretty much why I haven't bothered with their new album yet, although I'm sure there's gonna be 1 song on that I'll love. When they first started rapping about getting reviewed by Noz or whatever it was somewhat novel, but the whole "On the way to meet Brandon smokin' trees/while Codie on Bandcamp with our MP3s" shtick has gotten really old.

well i like both 2lettaz and yung clov but its obviously block beattaz that keeps me listening... i interviewed cp and he said theyve produced for pimp c.... and sampled scatman john for jackie chain (all unreleased i think, the latter which i think should stay so, yes?)..... theyre the nicest guys u could meet tho...

Exactly. "now the critics be comparing us to outkast" was the moment it started really feeling like some cringy netcee shite to me. Sucks on "top of the world like Ball & G" is the new "paid in full like rakim" too.

They should just play their position and rap about being able to get a mortgage or whatever. I already get more than my RDA of rapblog insider minutiae off twitter.

That's why I prefer Huntsville artists such as Zilla and Junebug. Junebug mostly just has features with Zilla but he's great and they allegedly have a tape coming. I don't think either of them know how to use the internet that well ... and I like it that way. Oh and they still have Block Beataz & company at the ready for all their production needs.

I also enjoy Mic Strange a lot. His verse on "Never" was one of the best from Cohesive in my opinion. If you haven't heard his track "Goin Hard" I think you might enjoy it as an introduction - http://youtu.be/hmjM7oSQKS0

His tape Da Bootlegz Volume 7: Zombieland has been getting a ton of play from me.

I've only listened to it once but iSLAND was disappointing, cosign everyone who cited their overly internet friendly references.

I thought this post was about the new Crag Thompson comic.