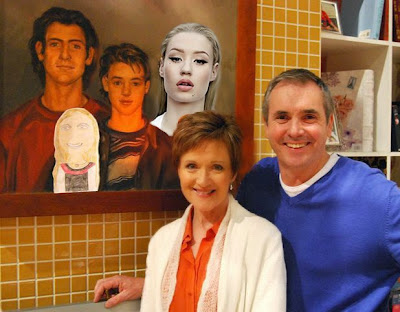 Alongside Look What I Did and Mo Flow, High Level here must be another one of the Grand Hustle cameo tracks Skeme had stipulated into his contract in exchange for ghostwriting Iggy Kennedy's lyrics and teaching her to replicate a more credible Yank accent than Rose Byrne in any of her Hollywood movies. Beat sounds like an upgraded classic Model 500 track, which basically means it's an Aux 88 song, but instead of 2 bald blokes from Detroit in XXL North Face bubble-gooses rhyming "Electro" with "Techno" over and over again for 4 minutes straight, you've got Skeme talkin' about dicking his girl down in a figure four leglock and Tarrie Bar-B braggin' about how she owns a pair of heels that are longer than your dick.

Thanx to Bubba Spartxxx for the photoshop; truly the Dario Argento to my Dario Gradi.
Posted by Kelvin Mack10zie at 17:55

Skeme does the gentlemanly thing here and let's Iggy outrap him with the lyrics he's written for her.

Officially known as the Akinyele circa Anakonda rule.

WHO IS THE PAUL ROBINSON TO IGGY'S IZZY HOYLAND?

Swaggy P = the English footbaler bloke Izzy ran off to London with.