Bobby all bound, Whitney with the g's 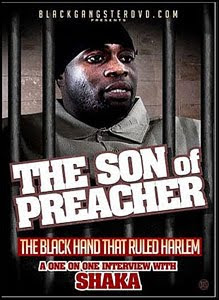 There's footage of me stagediving as the age of about 16 on Youtube, yet nobody has thought to upload that The Son Of A Preacher : The Black That Ruled Harlem documentary about Clarence "Preacher" Heatley and his crew The Family? Everything is heltah skeltah and the internet done got its priorities fucked up. You're probably thinking this is yet another generic 'hood dvd about a bunch of degenerate Uptown criminals who weren't even a quarter as interesting as Azie, Rich, and Alpo, right? Possibly; where these guys differ from the myriad of other bargain bin versions of Harlem's premier triumvirate is that there's an urban legend which alledges the crew kidnapped a certain drug addled R&B singer who happened to be married to a certain narcotics abusing MOR/R&B diva, and I really wanna know whether the incident is covered in more depth in this documentary. So, until someone ups it or I can find a non-suspicious looking downloadable link, here's the story, as jacked from elsewhere :

Brown was snatched and held “naked and hog tied” at gunpoint by members of a notorious New York street gang known as the Preacher Crew, according to the author.

He was later allowed to make one phone call to Whitney, in which he pleaded with her to personally deliver the ransom to an abandoned building in the Bronx.

Disguised in a wig and dark glasses, the terrified singer obeyed, and handed over a duffle bag containing the cash 24 hours later to 6ft 7in gang boss Clarence “Preacher” Heatley, says Collins.

He claims the kidnapping, which was never reported to police, happened in April 1993 when Whitney was at the peak of her fame with her film The Bodyguard and its soundtrack album, both huge hits. Unlike the movie, however, in which Kevin Costner co-starred as her heroic minder, Whitney was forced to face her then husband’s kidnappers alone to hand over the ransom before they were both allowed to walk away free.

Former gang member Collins claims in his autobiography, Preacher of the Streets, that Brown was snatched over a $25,000 debt to a New Jersey drug dealer. Heatley, currently serving life without parole after admitting being involved in 13 gang-related killings, allegedly paid the dealer and “took over the debt”.

Heatley – described by Collins as an eighteen-and-a-half stone “mountain of evil” – then told gang members he had a plan “to make a whole lot more than $25,000”. His henchmen were sent to a Manhattan nightclub, where they allegedly plied Brown with high-grade cocaine, later luring him to a Bronx apartment with the promise of more.

Collins claims Brown was taken to a sleazy, abandoned apartment that had been taken over by Preacher Crew members. There, he was “knocked out with one punch” by one of Heatley’s henchmen. “When he awoke, Bobby was naked and hog-tied, his mouth stuffed with a rag,” says Collins.

The Pre-acher then showed up and took the rag out of Bobby’s mouth. ‘It’s a shame we have to kill you,’ Preacher told Bobby. Bobby begged for his life and said Whitney could pay the debt.

“The Preacher left the room and his men then terrorised Bobby for two hours. They kicked him. They told him they would kill Whitney. One of them put a gun to his head. Bobby was weeping when the Preacher came back in the room, begging the Preacher to let him call Whitney.”

As Whitney pleaded with him to spare her husband, “they came to an agreement. She was personally going to bring $400,000 to get her man back. The next day, she did just that. She was wearing a wig. She paid the money. Bobby was free to go.”

Collins writes: “Once they were gone, Preacher sat there with the duffle bag of money and split it with his men. Preacher kept over $200,000 of it.” Collins believes both Brown and Whitney were lucky to escape shaken but virtually unscathed.

More amusing mental image : a weeping hog-tied Bobby or Whitney trussed up in a wig and shades wandering around the Bronx with a duffle bag stuffed with 400 grand?

Yes! Thanks to Jasper in the comment section who put me onto a link for a Faith Evans appearances & remixes compilation which includes G. Dep's Everyday remix with her I keep harping on about wanting a dirty version mp3 of :

Already the 2nd best song on G. Dep's Child Of The Ghetto album as it was, the 12" remix with the added crooning by Faith gives the song extra pathos a la the title track on Black Rob's first album. Now all I need to complete my stash of rare Bad Boy moments is someone to come through with an MP3 of Black Rob's Take It Off which was an obscure late 90s mixtape cut where B.R apparently reimagines Spoonie Gee's '86 classic as a stick-up kid anthem. I've never heard it and I don't think it's ever been uploaded to the 'net, but I need that shit in my life. Anybody?
Posted by Kelvin Mack10zie at 19:21

Email ThisBlogThis!Share to TwitterShare to FacebookShare to Pinterest
Labels: Lookin' all Harlemish shoe game marvelous, rap, tv blues, why you wanna do that luv huh?

If you find this documentary you'll have to let me know. I wanna see it too.

There are clean torrents for it on btJunkie etc

I've never worked out how to Torrent, Bozack, but I'll try and get a friend to snag it from there for me. Cheers.

'Sup, DJ. Could really go for a post on the woes at Anfield right now.

No link to the Faith Evans appearances & remixes compilation from Jasper?

Here's a link to watch it... Shit is DEEP.
http://playonclick.com/Videos/showMovie.php?id=3387