No legal documentation or map has ever proven T-La Rock's boast that he's the male sovereign of a mysterious land known as Lyrical to be true, and Suga Free's moniker has to be an outright fib given that blood glucose levels in the human body oscillate between 3.6 and 5.8 mM at all times, yet neither dubious claim hinders the sheer awesomeness of It's Yours or Why U Bullshittin'? because authenticity in rap is only important to the most delusional of rappers and dudes in Youtube comment sections with names like YayKingEnt or DAMONEY 187. Listening to Dr Jeckyll & Mr Hyde, you'd imagine their lofty gloats about extreme affluence were escapist yuppie fantasies inspired by them watching Blake Carrington ballin'-outta-control in Dynasty on tv, but, think again, because this snippet from an upcoming interview with Alonzo "Mr Hyde" Brown at The Foundation website reveals that, while the "Rockefeller, he balls for me" line in Gettin' Money may have been a teensy-weensy bit of an exaggeration, Alonzo and Andre "Dr Jeckyll" Harrell really were living that corporate lifestyle when they were moonlighting as the dons of republican-rap in the early eighties before they both went on to become genuinely stinking rich :

Troy : Yes I heard a lot of good things about Spivey as a D.J. back in those days. O.k so what turned you guys on to wearing suits regularly during shows?

Mr. Hyde : Well during the early 80's Andre was working at 1010Wins as an account executive and I was working at the American Stock Exchange. I took an internship there while going to Lehman College. I would go downtown and I would see these guys in these suits with this and that and they just looked like they had their shit together. They looked professional and they commanded respect and Dre was on the other side doing the same thing. He wore a suit and a bow tie and all of these things in terms of dealing with business. So it was the thing that we saw that made us go, "We want to be there!" Alright, living in Harlem back in those days your aspiration was to get a good job, you know what I mean.

Mr. Hyde : Bingo, and I was there! I worked at the American Stock Exchange. I was on the trading floor being a runner not a stock holder or anything like that. But I would work with all of these ballers. So I said I want to dress like the ballers, so it became like a normal thing for us. We didn't wear that in Harlem World because we couldn't afford it but we slowly graduated into that.

Troy : So it is safe to say both of you were getting off of work from downtown kind of late and went into Harlem World with your same suit on...

Troy : ...and started rocking the party!

Mr. Hyde : Well not in Harlem World. We started hanging out in Bentley's, Leviticus, Silver Shadow and we use to rap there. So we moved into the circle of the after party, six o'clock crowd, so brothers use to go from work to clubs on Thursday and Friday nights. So that was how we got the term the suit and tie rappers. Have you seen the album cover?

Troy : Of course I remember when I was a young teenager and you two were doing your thing. Ya'll stood out extremely, in fact I don't even remember seeing your face, I just seen the suits!

Mr. Hyde : And that was part of the reason why we did it. How could you tell us apart from Grand Master Flash and all of these guys and this and that.

Troy : You and Andre's name Jeckyll and Hyde was very interesting in itself but the suits took you guys over the top. 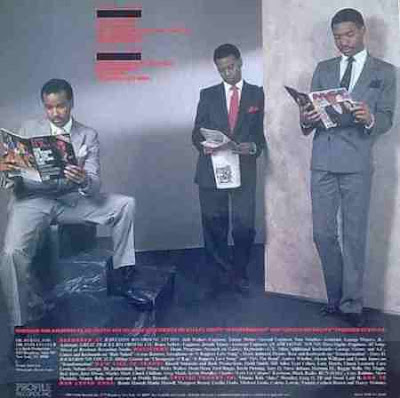 On a related note, I just wanna send out a quick "suck dick with piss in it" to Oliver Stone and FOX because Wall Street : Money Never Sleeps was a hodgepodge of about 5 seperate genres, 2 MacGuffins and 1 really annoying female lead, even though the original Alan Loeb script suggested this could be the first decent Stone movie in, well, lord knows how many years.
Posted by Kelvin Mack10zie at 18:37

BUD FOX CAMEO WAS THE HIGHLIGHT OF WALL STREET 2

man that sites great cheers. its like that golden era supplement hhc had, but moar

Definately. The Michael Jonzun interview is one of my favourites. So arrogant and funny.