B-B-Byrd Gang is the word

Since Max B is teetering on the tightrope of being the first nu-New York rapper to become a legitimate blog darling, and KanYe's aimless Rapper's Delight-length G.O.O.D Friday posse-cuts are completely lacking in all of the crucial intermutual ingredients any song with 3 or more rappers on it needs, I really can't think of a better time for a quick appreciation of Byrd Gang at their 2005 - 2008 peak than this evening. 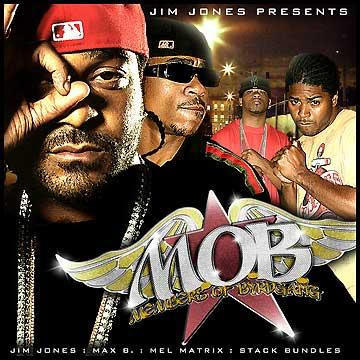 Byrd Gang were the closest thing rap had to Mourinho's Inter Milan side where an unlikely combination of longstanding weedcarriers and mercenary rookies were consolidated into a cogent unit and each man played his position with a brawny efficiency as he modelled his role in the group on the greats of the past : Jim Jones as the amusing Eazy-E central villain letting the other members get their hands dirty, Max B as the Pimp C-ish songwriter and hook-singer, Stack Bundles providing the muscle a la Styles P, and Mel Matrix being a reliable henchman with a fine line in disrespectful bars about the fairer sex in the Sheek Louch mold who was also possibly incumbent in picking up the group's amaranthine supply of Ed Hardy shirts, shiny skull-belt wallet chains, and bedazzle-arsed distressed jeans since he wasn't busy composing or ghostwriting like Max and Stack were. Still, at least Byrd Gang had a look, and that's an important consideration here because all great rap groups from Run Dmc and N.W.A to Mobb Deep and the Hot Boy$ to Dipset themselves circa 2002/2003 had a distinct gang look which helped enhance their mystique, even if that look in this instance can only be described as the 4 lads from the Jersey Shore :

So, here's 5 of my most cherished songs by the original incarnation of the group, which were all released on the various Jim and Byrd Gang mixtapes from 2006 - 2008 rather than any of Capo's proper albums or the Stack Bundles and Max B-less Byrd Gang group album from summer 2008. Honourable daps must go to G's Up, Ya Dig!, Beverly Hills Cop, Tell Me Sumthin I Dont Know, the Black Superman remake, I'm Paid, 2 Blocks, New York Minute, and We Roll.

"Screamin' and yellin', talkin' 'bout I bang too hard
you ain't got a problem bangin' on that Visa card"

"Ohhh, there that n*gga go again with the wave
that got his grandmother turning in her grave"

Byrd Gang - Bury Me With My Gucci's

R.I.P to Stack Bundles; you totally made Lupe Fiasco listenable when he was sharking Fabolous instead of KanYe.
Posted by Kelvin Mack10zie at 18:37

did cam'ron ever do any songs with byrd gang?

nice drop. i missed alot of this as was without internet for most of 06-07.
good to know im not the only person not feeling all those Kanye joints aswell.

Byrdgang had that potential be the next big group out the east coast it's a shame Stacks died and Jim fucked up his relationship with Max. By the way change the settings on your blogger comments to allow simply a name/url rather than signing on to an account...shit is annoying

Stack bundles and max b are byrdgang.