Years before Steady B became Cam'Ron's go-to lyric whenever he's in need of something to rhyme with Heavy D, the Fat Lace crew were printing up FREE STEADY B t-shirts and recreating his bungled bank robbery with Cool C which left police officer Lauretha Vaird dead for issue # 4 in 1999 as a fashion shoot. Even with a Swollen Members tee on display, this is still the absolute zenith of Rap magazine content: 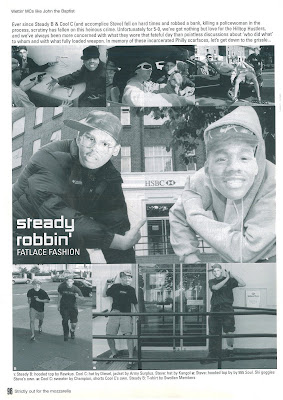 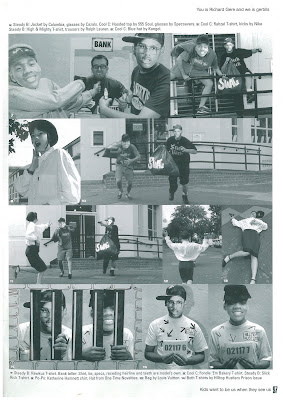 Everybody who's ever laughed at this piece has probably procured themselves a one way ticket to Hell in the process, but at least our nether regions will be fairly low on the pecking order for eternal prodding from Satan's recalescent pitchfork when Cool C has shown zero remorse for murking Miss Vaird and even maintains his innocence when there's Steady B's statement, 3 eyewitness testimonials, CCTV footage and forensic evidence to the contrary. Lucifer will get central heating installed on his manor before 9 out of 10 rappers currently serving time for murder will ever come forward on that Juve' type shit and say "I did dat!"

Email ThisBlogThis!Share to TwitterShare to FacebookShare to Pinterest
Labels: Fat lace, magazines, rap, why you wanna do that luv huh?

excellent. I seem to remember something about a Biggie feature with the board game 'Operation' that got the FL crew in some trouble. You got that issue?

Will add that one to the to scan list.

Man your scratching so many things off my wishlist with these, cheers.

Drew got back some karma points at least, with that serious frowney article on the robbery he did later in hhc.

Yeah, weirdly I also got commissioned to write an even more serious and frowny piece on it for, of all magazines, Nuts. I think they didn't run it in the end, which is hardly surprising, but they still paid me.

incredible work by all involved in that.

Ha no way, might've jarred next to the Michael Mcintire interviews or whatever.

Probably would've been accompanied by a Danny Dyer column where he suggested Cool C should've slashed Lauretha Vaird's face instead.