When you see a Devil shelve him

"I had so much fun in the studio recording the Breaking & Entering soundtrack and Dial-a-Freak along with Yes Yes Yes, I couldn't wait to get back in the studio and do a solo project. Something I could play at the dances to let people know my name, so I called the song Egypt, Egypt - I was kinda vain. It wasn't always gonna be called Egypt, Egypt so let me tell you how that came about.

When I was just out of high school in july of 1981, a couple of friends of mine and I went to a house party. This really cute girl was there and I wanted to get to know her. She was smoking weed and I thought if I smoked some she would like me. So my friend bought some weed from some random guy and we started smoking it. My friend said to me that he had been smoking for quite some time but this one was different (it had been laced with something) so we all agreed to leave the party. Driving home we almost spun the car around in the rain, but finally made it safe to our street. We went into my friend's house with some serious munchies and ate everything we could find. I even used a screwdriver to break old Christmas candy out of a glass jar his mom had on the coffee table.One of my friends passed out on the couch went to his room to sleep. I lived right down the street so I could just walk home. I got up and walked to the door. As I was opening it, the screen door opened by itself and there stood a person who looked like Saddam Hussein and Prince all in one. I guess that's what I thought the Devil would look like, but I knew it was him. He walked with me down the street talking to me and said ‘You are going to be very popular one day and the song you're going to make will be called Beast Beats and you will make a lot of money.’ I walked faster and faster until I got to my gate and closed it fast behind me. He disappeared. I slept and never thought of this again.

The day I was going into the studio to make my first solo record I walked past my sister and mother and told them I was going to the studio. My sister asked what the name of the song was and I said Beast Beats and my sister said ‘You shouldn't play with the Devil like that’ and at that moment it all came back to me. Two years ago he told me just that. So I went into the studio, changed the beat, got out my book of rhymes and put together a new song and that song was Egypt, Egypt. I can still hear Beast Beats in my head but I will never put it out!"

"Saddam Hussein and Prince all in one"? The greatest trick the Devil ever pulled was convincing Egyptian Lover he didn't meet his future-self circa On The Nile on that fateful july night of 1982: 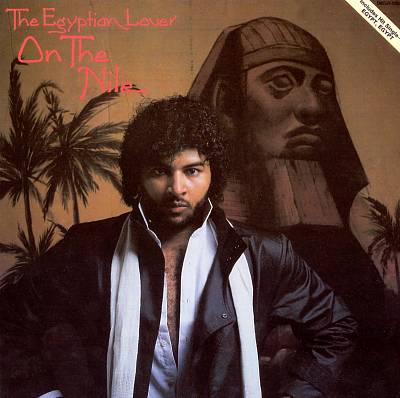 Alas, Egyptian Lover doesn't mention whether he sold the ASCAP rights for an electro song with the word Beast in its title to Afrika Bambaataa.
Posted by Kelvin Mack10zie at 20:22

The curls to get the girls